MLB Remains Under Siege from Those Damn Bees 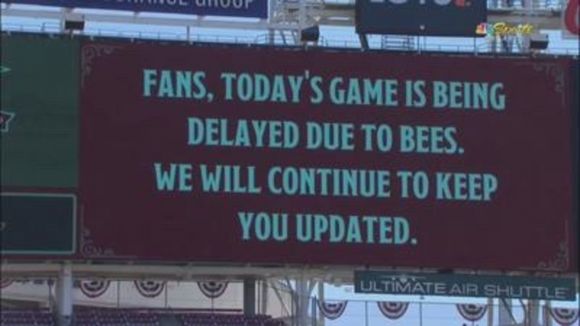 Sadly, we have some more sobering news on the bee front.

Cincinnati has joined the list of unfortunate MLB cities to be overtaken by swarms of bees seemingly determined to destroy our beloved national pastime.

The Reds and Giants were just about to begin a lovely Monday matinee when the horde descended on Great American Ball Park.

Apparently, brave and possibly deranged Reds utilityman Derek Dietrich decided to take matters into his own hands, attempting to solve the bee issue through sheer force of personality and creative exterminator cosplay.

We are currently in a bee delay at GABP. 🐝 pic.twitter.com/lOmvC2X7tz

While the effort was commendable, that may have only exacerbated the situation.

Fortunately, there just happened to be not one, but two actual beekeepers in attendance.

We aren't terribly bright, so we won't attempt the math, but let's assume that the odds of this happening must be astronomical.

Anyway, these two professionals got to work, eventually combating the problem armed with nothing but a cardboard box and their wits.

Just so you know, this is part of what they were dealing with, along with more Dietrich:

Those umpires were looking at him with a mixture of pity and contempt.

In all, there was an 18-minute delay before the game even started, while those two diligent beekeepers worked throughout the game to humanely collect the bees in the stands.

It's really hard to find good help these days, so cheers to the true heroes.

The blow torch was a bad choice.