Oh Dear God, The Bees Have Returned to an MLB Ballpark Near You 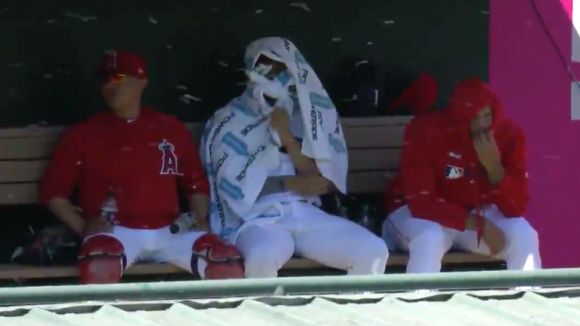 Well, the calendar has flipped to April, so that can only mean one thing.

Yes friends, the bees are back and highly motivated.

The long and sordid history between MLB and the bees has been meticulously documented, with a number of swarms unleashing all manner of hell in Kansas City as well as Arizona, where an attack was perpetrated on Spring Training.

Sadly, Anaheim has now made this dubious list of unfortunate venues.

Unfortunately, these new bees are both well-organized and really into baseball, so resistance is futile.

Oh, and they're also quite disagreeable.

Those in attendance for the epic battle between the Angels and the Rangers bore witness to the power and majesty of the bees, who decided to pay an unannounced visit to the respective bullpens.

Attack of The Killer Bees!!!

This is like something out of a horror movie...#TogetherWe pic.twitter.com/NDtzvm9YRI

As you can see, this wasn't a social call, as these relentless bugsters clearly meant business, emptying out both pens and forcing Texas reliever Kyle Bird to eventually flee before finishing his warmup tosses.

The Angels relief dudes seemed ready for anything, as if they had somehow anticipated this apocalyptic scene.

Preparation is half the battle.

Because the horde didn't issue any formal demands, it's difficult to determine an objective, although some have speculated that a handful of the bees were attempting to force their way onto the 25-man roster of either team.

Clearly, the next CBA will have to address this possible scenario, among other things.