Bees Terrorize Yet Another MLB Game 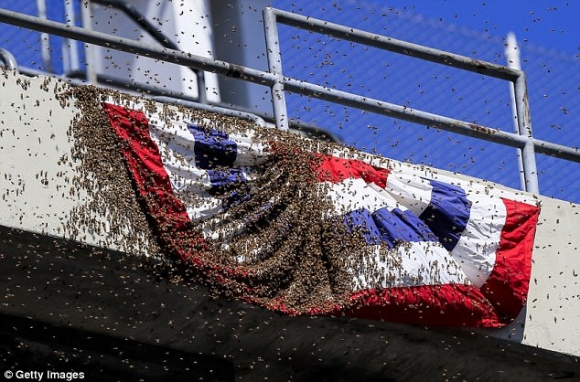 These bees are becoming a real problem.

You may recall the angry swarm that interrupted an exciting Cactus League game between the Rockies and Padres back in late March.

Now it appears that Kansas City is on high alert.

Kauffman Stadium was engulfed by a horde of bees recently during a Royals game against the visiting Cleveland Indians.

Fortunately, as the game was being played in Kansas City, the upper deck appeared to be completely empty, but that's still a hella lot of bees.

Improbably, the Royals actually have a grounds crew member on staff who just happens to be a professional beekeeper, so that was helpful.

Perhaps every MLB team should have one on staff, just in case these bees get really organized.

It doesn't appear they're being used for nefarious purposes, but we should still be careful.

The Royals have been exposed to a swarm previously, as there was an assault during a spring training game in 2016.

At the time, manager Ned Yost was advocating for the humane removal of the precious honey bees, citing their importance to the environment and whatnot.

Probably for the best, as your firearms are useless against them anyway.