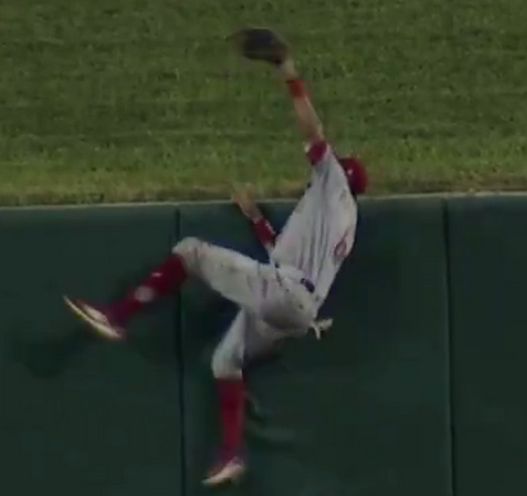 Billy Hamilton has been known to flash some leather from time to time.

In addition, the Cincinnati Reds centerfielder really seems to enjoy scaling outfield walls, both home and away.

Recently, the nimble Hamilton decided to do some recreational climbing in St Louis, robbing the Cardinals' Matt Carpenter of a homer in the process.

Dude didn't appear to be using any visible means of support, such as a harness or rope.

Also, no webbing or radioactive spiders were involved in the making of the grab.

The diminutive speedster is no stranger to this sort of thing, as he has publicly defied the laws of gravity before:

That gem was also at Busch Stadium, as Hamilton appears to enjoy taking nice things away from the Cards.

Right now, they're also taking revenge on St Louis. Dudes started the season series 0-9 against them until snapping that skid in the last game of a series in Cincinnati and following it up with this 9-1 victory in the opener of this series.

Meanwhile, back to Hamilton.

Here's another thorn he put in the Redbirds' side from just last month:

Reds broadcaster Thom Brennaman seems to ask the same question after every Hamilton catch, but we're definitely not kidding.