Hey, Let's All Vicariously Troll the Astros through Joe Kelly 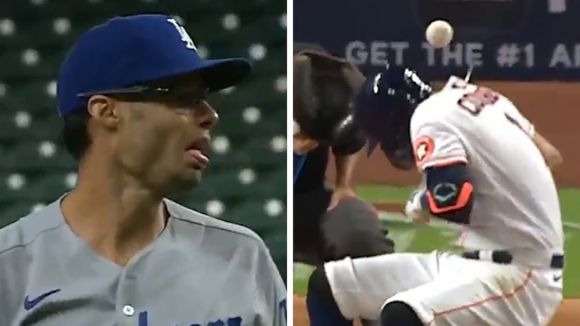 These days, some good news every once in a while would certainly be a welcomed respite from the tedious, spirit-mangling slog that is the year 2020.

Hell, a little justice would also hit the spot, even if it's just of the karmic variety.

Somehow, Joe Kelly must've sensed this disturbance in the force, because he completely nourished a hungry nation last night in Houston.

Sure, some may argue that the Dodgers' reliever paid a steep price for his heroism, earning the wrath of MLB and a rather harsh eight-game suspension.

Now you may recall that the Astros were cast as villains after their adorable plot to undermine the integrity of baseball via a sophisticated electronic sign-stealing enterprise was ultimately revealed.

Of course, since we've been dealing with a medieval plague for most of the calendar year, this nugget of information might've slipped the minds of the average fan.

However, the one team that has the most skin in this game doesn't need to be reminded.

Actually, his name is Joe Kelly.

Check this shit out:

Holy headhunting! That was a very intentional buzzing of Alex Bregman's tower.

But he was far from through:

The Dodgers and Astros cleared the benches after Joe Kelly struck out and exchanged words with Carlos Correa. pic.twitter.com/Z2l2A1sMG6

And what was Joe saying to Carlos after the strike out and sad face taunt, according to Houston skipper Dusty Baker?

Dusty Baker on #Dodgers reliever Joe Kelly: "What really enraged everybody was what he told Carlos [Correa] when he struck him out, "Nice swing bitch!''

Someone needs to dip Joe Kelly in bronze immediately.

And for a bit of perspective, here is Bregman, Jose Altuve and their barely human owner Jim Crane apologizing at the beginning of Spring Training earlier this year.

We certainly don't have enough time here to circumnavigate that ocean of bullshit, but suffice it to say those 2017 World Series rings are still in their possession.

Meanwhile, the breathtaking irony of Kelly receiving a lengthy suspension while not one single Astros player was disciplined last night or in the wake of the scandal remains there for all to see.

Fortunately, Joe seems to be handling the situation with aplomb: