Pitchers Using Spring Training to Sharpen Up for Plunking Astros 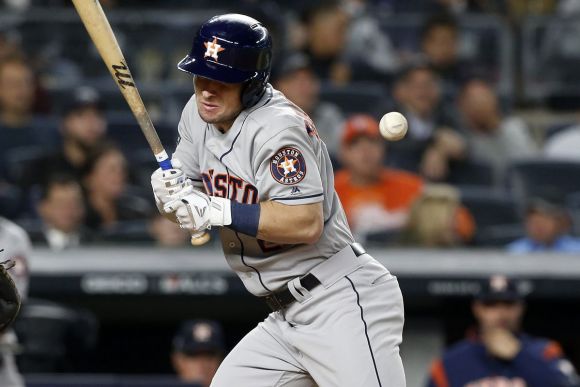 New Houston manager Dusty Baker has already warned against it.

In a massive reaction that MLB Commish Rob Manfred and his court probably didn't see coming, outrage of the Houston Astros' sign-stealing shenanigans goes beyond fan anger. It's rampant among the players, too.

A few of the sportsbooks are thinking it might be worth watching:

Vigilante justice or no, the over is gonna be an intruiging prop bet. Here's where the 'Stros have been in the team HBP category in the past four seasons:

Kinda looks like dudes have been targets ever since they got good. So, getting pegged 20 more times than last year would involve opponent anger carrying through the entire 2020 campaign.

That'd be some serious overachieving.

Oddly, Houston owns the National League record for HBP, before then-Commish Bud Selig made switching them to the American League a condition of Jim Crane buying the club. Dudes got plunked 110 times back in 1997, due in part to Craig Biggio being one of the greatest ball-in-body targets in baseball history.

He racked up 34 of them in that year alone.

And to think he accomplished all that without having pitchers pissed off at him.

Maybe the club should call him in as a consultant this season.

The recurring theme in other spring training camps -- and possibly even in the other half of the West Palm Beach complex where the World Series Champion Washington Nationals reside -- has been the opinion that the 'Stros players themselves were never punished for their sins.

The Commish granting them immunity to hasten the investigation is viewed as lazy and cheap.

What they perceive -- despite the reality -- is careers were affected, awards were denied, and bonuses weren't given because of Houston's cheating.

In a profession where competition is an intensely determining factor in whether or not jobs are kept and salaries are based, it's the brazen scope of what the Astros did that boils blood.

Or, in what seems to be the case this spring, causes bruises. Lotsa bruises. And it looks like those hits will just keep on coming.