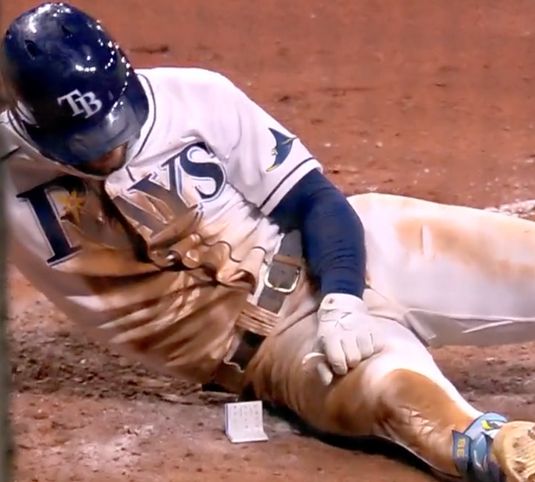 In these modern times, one of the most basic understandings of property possession -- finders keepers -- is a hit-or-miss proposition.

Baseball sees this from a slightly different perspective:

Tampa Bay Rays OF Kevin Kiermaier can attest to this.

In Monday's game at the Trop against Toronto, dude got thrown out at the plate after his infield single turned into a trip around the bases when 3B Jake Lamb threw the ball away.

Dude wasn't necessarily on litter duty. He just noticed what looked like -- according to him, anyway -- his data card. That's what most players carry with them these days to know how they're pitching to and positioning against that particular game's opponents.

So he picked it up and sauntered along to the Rays' dugout.

That's when he noticed it wasn't his card. Instead, it belonged to Jay's C Alejandro Kirk and fell outta his wristband.

What's a finder to do?

We can't get any hits off him, anyway.

Setting aside the fact that they collected seven of them and nicked him for three earnies in their 6-4 victory, this was kinda missing the point.

The hell of it is, MLB's not that far removed from the Houston Astros' drumbeat cheat and the Boston Red Sox smartwatch signals.

Ultimately, Rays manager Kevin Cash returned the card to the Jays and apologized to Montoyo.

Still, this incident underscores yet again the gray area between what baseball considers to be the difference between gamesmanship and cheating.

However, right in the middle of that gray area is spitballer Gaylord Perry, who's in the Hall of Fame primarily because of that illegal pitch. So are a veritable litany of hitters who corked their bats.

Traditionally, the players themselves sort those distinctions out for themselves with their version of frontier justice.

Kiermaier can attest to that, as TO slinger Ryan Borucki dispensed the next night. Of course, the pitch that drilled Kiermaier was one that just got away, after which everyone nodded knowingly and then carried on.

Did all this bring any clarity to the issue?

The Rays were right that Robbie Ray is tough enough to hit, and chances are he's not gonna change his approach. It's doubtful that's gonna be news to Tampa Bay's hitters, too.

Among other factors, ballplayers show up at the yard around six hours before first pitch for a reason, and that includes time in the video room reviewing past ABs against the opposition's pitchers.

They know what's coming. They may not know when in a sequence it's coming, and that's usually the challenge. Even then, the axiom about the hardest skill in sports is hitting a round ball with a round bat and hitting it squarely is evidence enough as to how tough this game is to play.

In the end, it seems all Kiermaier did was save the groundskeepers an extra sweep or two. He may have been a finder, but in the bigger picture, he wasn't a keeper.

And he wore one for his troubles.