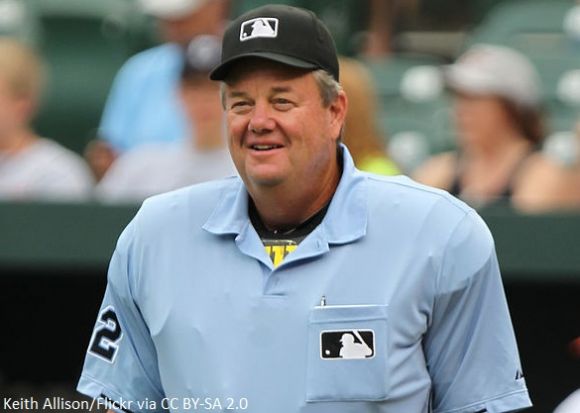 One day in the not too distant future, the robots will rule us all with machine-like precision.

The MLB strike zone will also be under their emotionless purview.

In the meantime, though, we'll be forced to endure nightly complaints about inconsistency and human fallibility behind the plate.

Particularly when Cowboy Joe West ambles into the saloon.

We'd like to think the Duke would be a bit more reasonable.

Have a look at this strike call from last night at Yankee Stadium and try to refrain from strangling anyone within reach:

It doesn't get worse than this.

Umpire Joe West blew 16 calls on the night, but none were worse or more significant than this one to Brett Gardner. It missed the zone by 5.23 inches. #Yankees v #BlueJays pic.twitter.com/lJfMyKh4is

Again, one day soon, we won't even need something like the Umpire Auditor to document this bullshit, but we must live in the now.

As you can see, that pitch was over five inches off the plate, one of a soul-crushing 16 blown calls on the evening.

But this obese cowpoke said strike, so instead of standing on first base, the victimized Brett Gardner eventually flew out.

Oh well, it's not like it mattered much in the ninth inning of a one-run game.

These ass-clowns have entirely too much power and not nearly enough accountability, as Big Joe demonstrates on a nightly basis.

And speaking of abuse of power, this maniac tossed Aaron Boone out of the game from third base earlier today: