Published on 9-Jul-2019 by Alan Adamsson 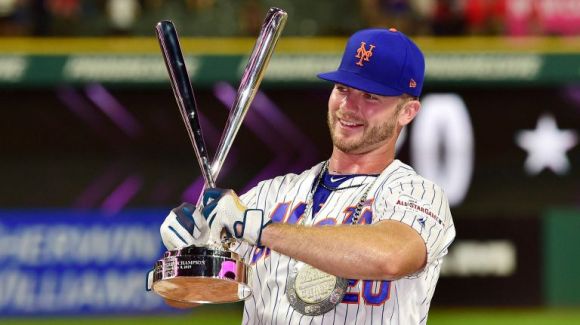 At least for one night, most of baseball fandom says who cares?

MLB's annual Home Run Derby the day before the All-Star Game has produced moments of shock-&-awe, but this year's version definitely outdid itself.

And it was a show, dagnabbit.

Dudes were grippin'-&-rippin' like that million smackaroonies for winning actually meant something.

Probably because it did. With the exceptions of homie Carlos Santana and the Dodgers' Joc Pederson, most of the contestants were being paid the minimum $555,000 or damn near it.

The first round showed a hint of things to come, as Pederson and young gun Vladimir Guerrero Jr hammered up early, confirming that a horsehide thunderstorm was on the cards when they met in the semifinal.

Then there was Matt Chapman, who proudly brought his dad to do the BP slinging. It cost him any chance for advancement -- OG's gopher ball wasn't working -- but still, it was touching in a non-competitive, family-tribute sorta way.

The concept for a home run derby goes back to a TV series in 1960 where the game's biggest stars filmed a set of matchups before the season.

The damage those dudes could do today ...

A major-league swing's an amazing thing, and its consistency is one of the reasons why legendary sportswriter Pat Jordan once said:

That was beyond evident in the Guerrero-Pederson semifinal, aka Bash of the Titans.

Some happenings just need to be seen in their entirety:

The other side of the bracket saw the New York Mets' Pete Alonso -- if fans never knew his nickname was the Polar Bear, they sure as hell did by the time this night was over -- advancing in dramatic fashion.

Dude started each four-minute round slowly, used his timeout to focus even more, and then went to town, walking off Cabrera and Ronald Acuña Jr with last-second blasts.

Even better, Alonso announced he was donating a portion of his winnings to beyond-worthy causes: $50,000 each to ...

Rising to the occasion is in Guerrero's DNA. Vlad's kid finished the night with a gobsmacking 91 dingers, while Alonso's secret to success -- as it's been all season -- was using the entire field:

This isn't all that common in Home Run Derby action. Hell, it's not all that common, period, anymore, but that's how dude's already set the Mets' rookie record for dingers in a season.

Putting it mildly, MLB's newcomers stole the kliegs on one of baseball's biggest stages. If they weren't well-known nationally before, they are now.