US Open: Woodland, Rose Hold Steady at 1-2 as Koepka Lurks Nearby 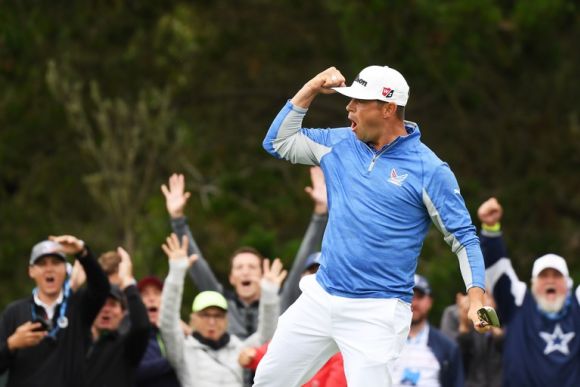 This championship chase is now down to virtual match play.

Except it isn't if someone else gets white-hot.

The US Open's second-round leader, Gary Woodland, held serve with a two-under 69 on Moving Day with first-round pacesetter Justin Rose gaining a stroke on him with a solid 68.

A trio of challengers stand four pops back, and one of them is Brooks Koepka, who's been here before and doesn't mind a bitta thrill of the chase. It's how he won last year.

Woodland and Rose, of course, were the final pairing with the leader actually putting more pressure on his immediate pursuer. There were two times on the back nine where it appeared Woodland would break, but that's when dude pulled a magic wand outta his bag.

First, he saves a par on the 12th with an incredible shot that prevented what coulda been as much as a three-stroke swing:

Two holes later, he dialed long distance to save another par:

That's what it's taken to be a 54-hole leader at Pebble Beach.

Because this is what Koepka's doing to stay close:

Koepka from the fringe! #USOpen pic.twitter.com/C9xWXQKSfg

Right now, though, here's the current center stage of the golfing world:

Of course, Round 3 continues to roll out the entertainment:

And here's how the chase sets up for what should be a riveting final round: