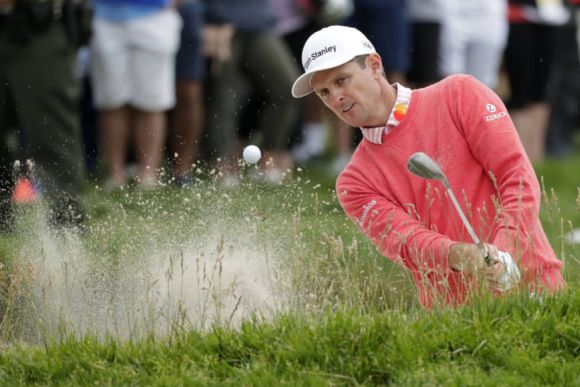 If ever there's a perfect course for the US Open and the challenge it wants to present, it's Pebble Beach.

It's the perennially the USA's top-ranked public course and so scenic that even non-golfers appreciate its environs.

When it gets prepped to host this Major, its purpose is to bring out the best in the best golfers on the planet, doing so by drawing players into their round over the first seven holes, allowing them to gain a measure of confidence, and then doing all and sundry to crush their souls:

The old adage that it's not how you start but how you finish rings true, but here, you'd damn well better take advantage of the opening the course gives you, because you'll need those banked strokes later.

That's exactly what Justin Rose did. The Englishman then proceeded to keep his act together to fashion a record-tying 65 after the first round.

Fittingly, the dude he matched was right there in his group.

Tiger Woods started that way in 2000 and then ran away from the field to set another record: largest margin of victory in a Major.

For Rose, though, it was one record at a time:

It'd be a good idea to keep tabs on Brooks Koepka, erstwhile winner of the last two US Opens and trying to join Willie Anderson (1903-1905) as the only other dude to bag three straight.

Koepka's dialed in again. Among other things, he showed he knew a thing or two about street golf while salvaging a par on 18:

After playing off the cart path, Brooks Koepka saves par on 18 and finishes with a 2-under 69. #USOpen pic.twitter.com/c18pmIqvqH

Overcast skies and a bitta fog softened up the course, so it was friendlier than usual this round.

Tiger kept himself in the early conversation by posting a 2-under 69.

Dude spent most of the round scrambling on the fairways, as his irons betrayed him. His putting, though, bailed him out time and again.

The USGA's plan is to toughen up the course for each successive round, so it could be looking mighty mean come Sunday.

If only Pebble Beach could talk.

Then again, it kinda will.