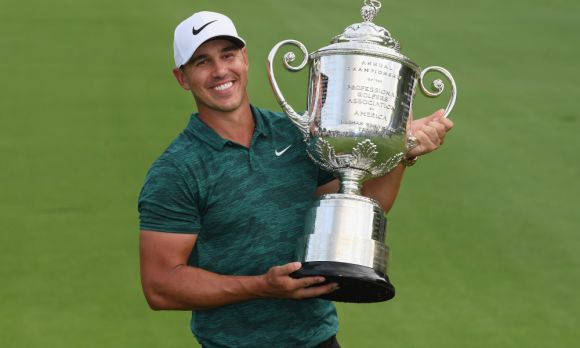 In yet another time-honored homage to that late, great philosopher Yogi Berra, it turned out that all 72 holes were needed at Bethpage State Park's Black Course to determine the 2019 PGA Champion.

And it was the same as last year's PGA Champion, none other than Brooks Koepka.

However, even though dude had so many strokes in the bank, what appeared to be a cakewalk almost became something else.

It seemed a foregone conclusion after the first round that Koepka's phenomenal 63 had won the title for him.

However, by the final round, a more accurate perspective is that it kept him from blowing it.

What a contrast in that opening-round pairing, too.

Koepka came into the tournament with a well-honed game, while Tiger Woods had opted to take a break after his dramatic Masters victory.

On a course like Bethpage Black, dude discovered the hard way that rust never sleeps. He carded a 2-over 72 that landed him so far behind Koepka, his only remaining challenge was to make the cut.

Only Dustin Johnson hung in there all weekend, thinking that -- if nothing else -- he'd win the Ed McMahon Trophy for being the eighth golfer in history to claim the Grand Slam of Second Bananas.

Dude damn near did better than that simply by backing into contention.

While Koepka was knocking out five bogeys -- against one bird -- on the back nine, the World No 1 at the time hampered himself with three. Par golf woulda crowned him with the title.

So let's ring up the new trivia:

What's more, dude's on a mega-roll, taking three of the last five majors and claimed the World No 1 from Johnson.

It was weird having the PGA Championship re-locate to May from August, and to commemorate the occasion, wacky sights were to be seen, like ...

Meanwhile, Koepka seems destined to go on to greater things.

As long as he constantly keeps Yogi's warning in mind, anyway.