The Cult of Tiger Is Still Thriving, Even When He Misses the Cut 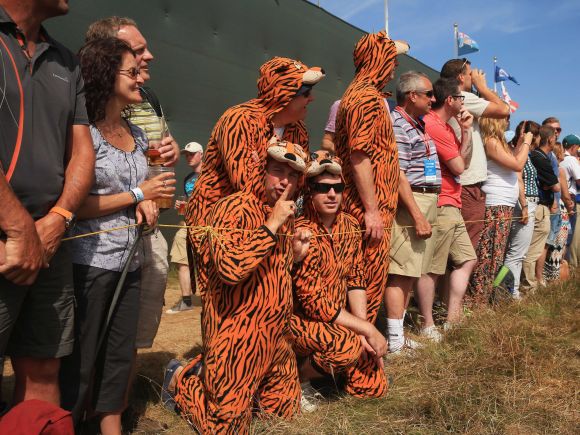 Unfortunately, Tiger Woods didn't quite make it to the weekend at the Open Championship in lovely Northern Ireland.

However, this reality did little to spoil the fun of a certain band of devoted male Tiger groupies.

It was difficult to miss these folks as the third round commenced on Saturday, because these dudes were, in fact, costumed.

We won't keep you in suspense any longer than necessary:

I’m guessing these guys didn’t get the news. pic.twitter.com/lkdhuI6JG9

Hey, Tiger doesn't have to be on the course for fans to enjoy a nice pair of fleece pajamas, although sporting those bad boys on Thursday or Friday may have been a safer choice.

Hey, we've got another one:

Actually, that was probably a furry meeting for dues-paying members and had nothing to do with Tiger or golf.

Tiger loyalists have been doing this shit for years, so this is nothing new, but their hero is typically still playing at the time.

Just to be clear, you can root for Woods without pretending to be a tiger, as these two dudes decided to do:

One of the funniest moments tonight..#TigerWoods fan - “Go on Tiger get another birdie”@TigerWoods - “I’ll see if I can”

Those shirts display both creativity and general golf knowledge.

Tiger definitely had a rough one out there, pretty much eliminating himself with a nasty 78 in the opening round.

Perhaps his hard core fans could have featured the signature red and black on Thursday to inspire him.