Tiger Woods Failing Miserably at His Own Tournament 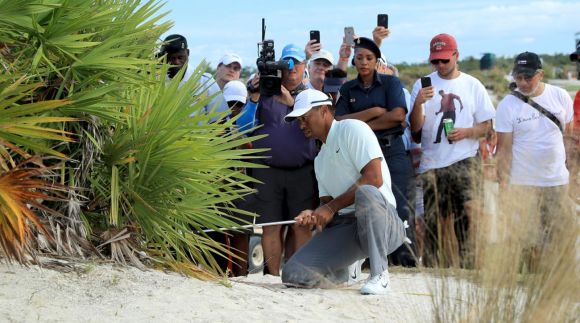 Golf is typically not a hot topic of conversation in December.

However, beyond that exercise in hubris, the PGA season ends in September, so there isn't usually much to discuss.

With the notable exception of the Hero World Challenge.

Well, that would be the golf tournament held each December in the Bahamas and hosted by Tiger.

This is an unofficial event, so these dudes are just playing for shits and giggles and charity.

While there are no game show hosts in this year's field, some of the top golfers in the world are present, including Tony Finau, Ricky Fowler, and Dustin Johnson.

Tiger's also playing, but not particularly well at the moment.

Yeah, not much Tiger there.

The gracious tourney host currently finds himself all alone in last place after a third-round even-par 72 put him at two-under overall.

Dude even received a penalty stroke on Friday due to the following shot:

Let's finish with some good Tiger.