The Open's Not Been Kind to Tiger, Rory, and Phil 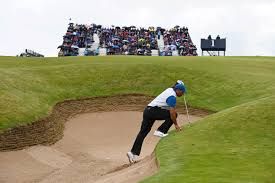 The grandaddy of golf's Grand Slams has returned to Northern Ireland for the first time in 68 years.

And for a few of golf's Old Guard, this year was still too soon.

Putting it mildly, Royal Portrush in Northern Ireland -- site of the 148th Open -- was not kind to a few of the PGA's more noted headliners.

The OG prepared for this challenge in some interesting ways:

In a crushing victory for common sense, none of those methods worked.

It didn't take long for the carnage to begin.

As to a suddenly slimmed-down Mickelson, when this is one of his better putts on the day ... When you're a short-game legend and getting outshot by Jong-Duck Kim, you may as well keep reaching for the Oreos.

Speaking of troubles coming down:

Putting it mildly, the rough is tough, but the sand traps are a bitch.

So it was that these big names fell victim to the cut.

Phil and Tiger getting matching pink-slips in a major was a first-time occurrence. Woods, for one, is being reminded the hard way about the dings and nicks adding up: Only McIlroy made a charge to save wounded pride in Round 2.

Dude fell a stroke short in his attempt to make it to the weekend. His 65 was one of the day's better efforts but not enough to overcome that opening 79, where that brain-fart tap-in miss turned out to be the telling factor.

Others, meanwhile, had their moments in the occasional sun:

What a start, indeed.

The Republic of Ireland's Shane Lowry may only be a neighbor to Ulster, but he's taking the mantel that everyone thought would belong to McIlroy.

Lowry and fellow lumberjack lookalike JB Holmes topp the leaderboard at the turn at 8-under par.

Holmes has matched the Irishman's spectacular moments with a steady performance:

As usual, the Majors are their own biggest stories. Big-brand names are optional.

There are still enough luminaries remaining to add to the festivities. For example:

This is the Open. The best is yet to come.