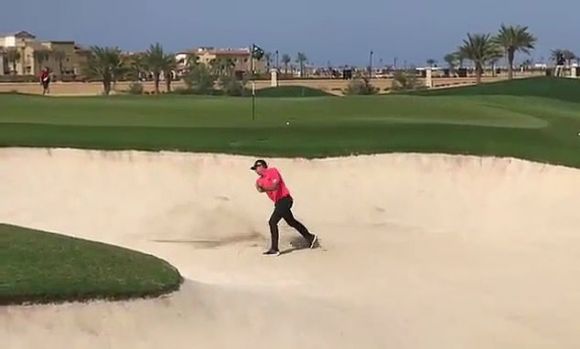 Playing golf at the professional level requires a certain degree of discipline and self-control.

However, Sergio García would respectfully disagree.

Actually, he'd be more likely to break something and storm outta the room in a huff.

Our favorite golfing manchild has had some very public meltdowns before, but this past weekend was his Citizen Kane.

García had an eventful weekend at a polarizing thing called the Saudi International, really providing an example of good sportsmanship for the kids at home.

The angry Spaniard seems to be struggling with his mental game at the moment.

The torrent of profanity was also helpful.

Yeah, that was pretty rough, but it somehow got worse in the third round, as Sergio was actually disqualified and asked to gather his things and leave the tournament.

Apparently, this maniac had scuffed up a number of greens and even left a large divot in frustration.

We know this because the super-popular Patrick Reed, among others, ratted his ass out.

While García did apologize to his peers for the infantile behavior, it didn't go over particularly well in the clubhouse.

For example, reigning US Open and PGA Champion Brooks Koepka found the whole sordid affair to be disrespectful, suggesting that Sergio quit behaving like a child.

Perhaps when he turns 40.