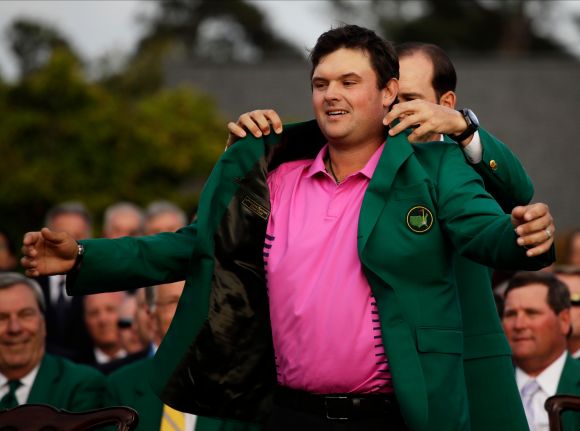 Not sure if even this will overtake Patrick Reed's shhh moment.

Then again, maybe it shouldn't.

It still says here that every sport needs its villains, and dude doesn't seem to mind that role at all.

In fact, Reed seems to embrace it, especially at the Ryder Cup where crowds are ... different.

The antics have bestowed on him the nickname Captain America. It's like he was born to play in this sorta format.

Because fate has a sense of humor, who else would be paired with Reed in The Masters' final round? The rematch was on.

The stocky Georgia transplant had an uneven but entertaining third round that was good enough to hold a two-pop lead over Rory McIlroy.

The Ulsterman fired a five-under 31 on the front nine that featured a nifty chip-in for an eagle at No 8:

A Masters title is all McIlroy needs to become the sixth golfer in history to achieve a career Grand Slam, but even that was likely secondary to relishing the thought of taking Reed down on the big stage.

However, that was easier said than done.

Reed may not have been the gallery's favorite here, either, but it's safe to say he's kinda grown used to that and got on with the task at hand.

As can happen at Augusta, the actual challenger came from elsewhere. In this case, outta the blue:

Despite all the amazing shots in that round, Jordan Spieth will no doubt remember that makeable eagle opportunity on 13 for a while.

Meanwhile, almost uncharacteristically, Reed played the chalk and fashioned the sorta vanilla round that put paid to the performance.

With that, the string of first-time winners of a major continues.

As far as Nike was concerned, the pink shirt and green jacket combo wasn't a bad look.

Reed had been donning red shirts in the final tourney rounds because that's what Tiger Woods did.

So Nike wants him to cool it with the red shirt. Time to find his own look.

That time has come, in more ways than one.