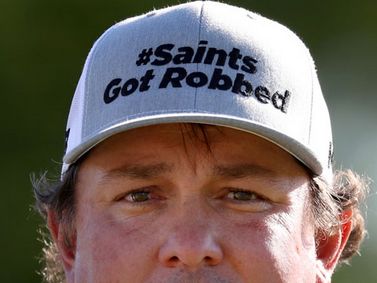 The PGA Tour is hanging out in New Orleans this weekend, which is never a bad idea.

Wacky golf character and caddie abuser Jason Dufner is participating in the Zurich Classic, so this can only mean he brought along his unusual collection of hats for the occasion.

Sadly, Dufner and his playing partner Pat Perez just missed the cut at seven under par, but that isn't important.

This hat is important:

Dufner may have soiled himself on the course, but he absolutely nailed the cap selection.

Clearly,dude knows how to please a crowd, because there were more than likely quite a few Saints fans lining the course who are still a bit salty about the NFC Championship game.

If this terrible miscarriage of justice has slipped your mind, here it is again:

Somehow it gets worse upon repeated viewing.

The origin of his hat can be traced to a New Orleans automotive dealership owner by the name of Matt Bowers, who also purchased the following billboards at the Super Bowl in Atlanta to remind the NFL that they're completely full of shit:

Byron Nelson champ Jason Dufner is in town to promote the tournament and help kids "learn to focus" @mschristine_lee pic.twitter.com/i1cGAgpeq6

The 2013 PGA Champion also recently hooked up with the good people at Dude Wipes.

That may be the best thing ever.