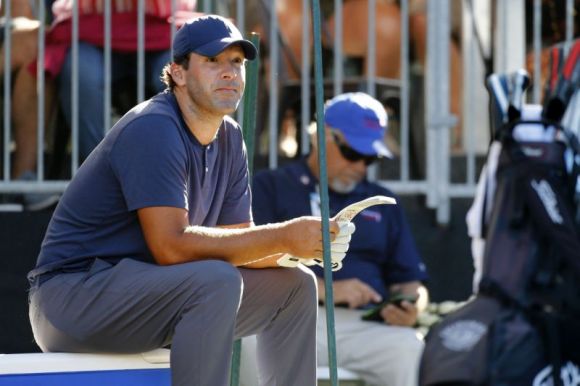 Tony Romo will be in the broadcast booth and your living rooms on Sunday.

The CBS No 1 color guy and rogue golfer was granted permission by the network to compete in the Safeway Open beginning Thursday.

Of course, the notion of Romo making the cut was dismissed as absurd before the tourney began.

But that was before the offensive coordinator whisperer posted a ridiculous opening round:

Tony Romo shot an opening round 70 at the Safeway Open on Thursday, better than Justin Thomas (71), Hideki Matsuyama (70) and Phil Mickelson (75). If Romo makes the cut, he will play the weekend and will miss Sunday's Vikings-Bears game.

However, the second round wasn't quite as kind:

QB on target. 🎯@TonyRomo is battling to make the cut @SafewayOpen, currently 3 shots back of the projected cutline. pic.twitter.com/ZN5hPT7fwS

Jim Nantz's BFF finished with a 78, which placed him six shots beyond the cut line.

However, that's not too shabby for a former professional QB turned broadcaster.

Every time he goes out and misses a cut he's taking a sponsor's exemption from an actual PGA player. He's pretty selfish.

You know, some folks just be hatin'.

Sadly, we'll be deprived the potential magic of a Nantz and Boomer Esiason booth.