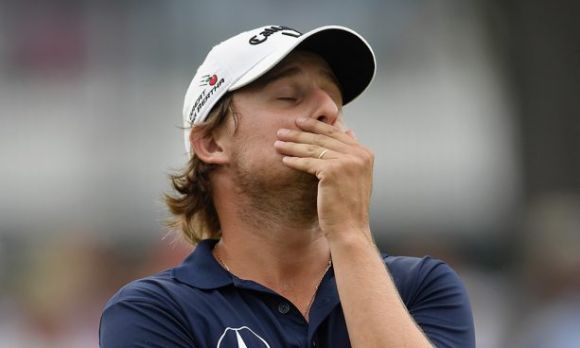 Every once in a while, the impenetrable barrier separating us mere mortals from professional athletes is temporarily lifted.

This tends to happen most often in golf, where the maddening nuances of the game suddenly make the pros completely relatable.

We mention this only because a dude by the name of Emiliano Grillo has gifted us with one of those precious moments.

The 26-year-old from Argentina participated in the wildly popular Northern Trust recently, but couldn't quite make it to the weekend.

It's certainly not ideal, but wait until you see how his Friday round ended.

Emiliano Grillo with the tough lip-out annnnnnnd he then flips off the hole. Yikes. pic.twitter.com/cLBxoEl3x5

Since Grillo would've made the cut if that putt had fallen, we are of the opinion that the obscenity was totally justified.

Not to mention the cool points he scored with us municipal course hacks, although those points won't improve his positioning in the PGA Tour FedEx Cup standings.

Besides, that hole was being a dick, anyway.

While the winner of the 2015 Frys.com Open was pretty frustrated, his finger puppetry isn't without precedent.

At the Masters back in April, Tommy Fleetwood fired one off at the hole, although his was a bit more subtle.

Did Fleetwood give it the brid 😂😂 pic.twitter.com/ILJFV9kKxt

While clearly agitated, Tommy was able to suppress his rage, which is an important lesson for all you young golfers out there.