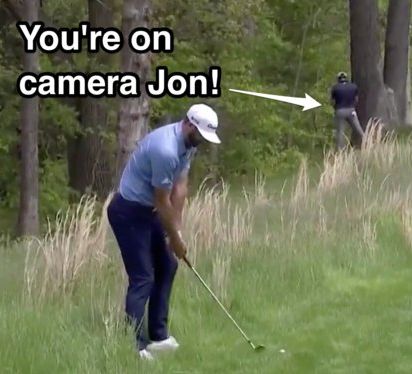 You can forgive Jon Rahm for being a bit pissy after completing his second round at the 2019 PGA Championship.

First of all, the recent winner of the prestigious Zurich Classic with dance partner Ryan Palmer missed the cut at Bethpage Black, following up an opening round 70 with a disappointing 75 on Friday.

However, that large number somehow wasn't the most humiliating thing that happened to Rahm on this fateful day.

Depending on your perspective, the following was far worse:

There's just so much to enjoy in that brief clip, from the delightfully unfortunate timing to one of the announcers talking about speeding up the game while a golfer takes a quick piss in between holes.

Dustin Johnson seemed oblivious to the tinkle, but at least Rahm was courteous enough to not urinate in a sand trap or indiscriminately spray the gallery.

Or on the green, for that matter.

Or a couch in the clubhouse.

Or even a rug.

We can go all day.

Obviously, the Internet wasn't going to let this fat pitch sail by without taking a hack.

Jon Rahm taking a leak while DJ hits is a good representation of his round today too. pic.twitter.com/mTqQCB1peZ

That's what we call symbolism.

Dustin Johnson prepares to hit his approach as Jon Rahm pees on a tree. A gentleman’s game indeed. #PGAChampionship pic.twitter.com/TrWMfFWDZ7

It's on par with someone taking a shit during breakfast at Wimbledon.

Jon Rahm out here shanking 9 irons out of the rough, and finding the nearest tree to relieve himself. HE IS MY CHAMPION! #PGAChampionship pic.twitter.com/DoseMcpqI5

Yes, this actually does make the 11th-ranked golfer in the world more relatable to us municipal course laypeople.

And possibly to R Kelly.