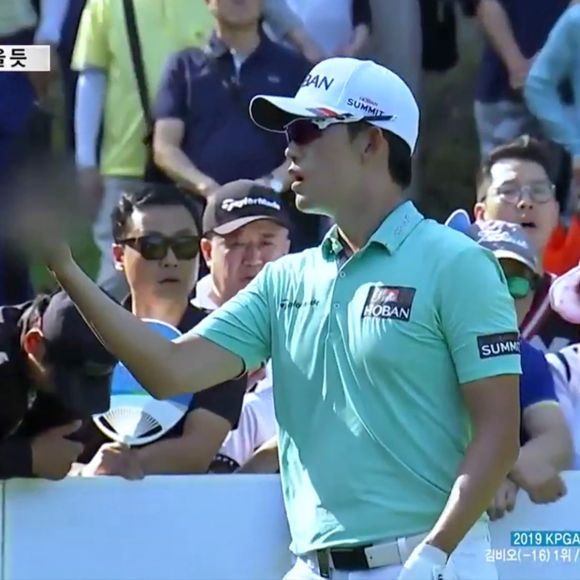 It'd appear that things are handled a bit differently on the Korean Tour, particularly in regard to discipline.

This past weekend, a South Korean golfer fabulously named Bio Kim lost his temper ever so briefly during a tournament.

However, this momentary lapse of reason really hurts.

Kim received a mind-blowing 36-month suspension from these rigid bastards.

Well, for this heinous act:

You may be wondering if dude kicked a child or strangled a pony immediately after that clip, but that'd be false.

Apparently, the protocol for this sort of thing is one full year for every second the obscene gesture is maintained.

Kim had a very human reaction to some nitwit taking a cell phone photo during his backswing.

Obviously, he could've handled it better, but this is just crazy talk.

So in golf, the middle finger = a 3 year ban! And yet, in football - Racism is mostly overlooked, or a relatively small fine for clubs. Someone needs to have a rethink here #etiquetteviolation #inappropriatebehaviourhttps://t.co/6n1c8WNtAl

Let's not get started on NFL hypocrisy.

Three year ban is extremely harsh for the simple act of reacting badly to a fan not behaving correctly on the course... https://t.co/kDasuULnZE #golf

Of all the daft bullshit.....!!! This is like a death sentence for stealing a loaf of bread. Waaay overkill. Stupid!

At least they let him keep his middle finger.

Kim actually went on to win the tournament but was then forced to do this in a desperate plea for mercy:

Bio Kim got on his knees pleading for mercy and forgiveness for flipping the bird at a jerk. Sergio destroyed greens in Saudi Arabia after taking a murderous regime's money and then started posting happy pics to his Gram feed. pic.twitter.com/C0tkcrCzSZ

There was none forthcoming.

And no suspension for Sergio García, either.

If only this had been North Korea, then maybe Dennis Rodman could've negotiated on his behalf.