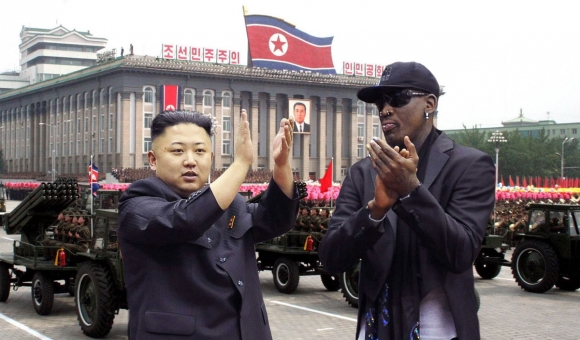 For reasons defying logic, the complete mystery that is Dennis Rodman has returned to North Korea.

You may recall the Worm being almost blackout drunk for most of the trip back in early 2014.

But all anyone really remembers is this absolute train wreck of an interview.

Seriously, try to watch that without cringing.

Anyway, the master diplomat and goodwill ambassador has returned to the personal playground of his best bud Kim Jong Un.

And once again, any possible motives for this trip remain unknown.

We do know that the mellow folks at PotCoin are involved, apparently providing some really ill-advised sponsorship for this misguided dude.

Obviously, the political climate has changed quite drastically since those salad days of 2014, most notably in the White House.

The seven-time NBA rebounding champion forged a permanent bond with our current president based on their shared reality television experience.

Well, he did fire him, though.

Rodman has a wonderful grasp of timing, as his visit coincides with escalating tensions between the United States and North Korea.

In addition, the rogue nation is currently holding a minimum of three Americans against their will.