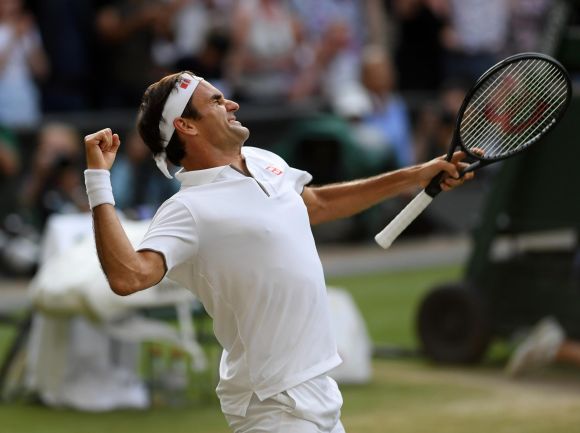 Only twice since 2003 has someone not named Roger Federer, Novak Djokovic, or Rafael Nadal won the Wimbledon men's singles title.

The locals thought that was a bit of alright.

To the Big 3 of men's tennis, though, it was merely a blip on the radar screen.

Odds are there were unrealistic expectations of another Federal vs Nadal classic like the championship match in 2008, but hell, we're lucky to witness performances like that once in generation.

As proof, here's one kid realizing his age group's still gotta wait, because this ain't it:

Federer-Nadal isn’t enough to drag this bored kid away from his book: https://t.co/WYP1EuGRc3 pic.twitter.com/VgaY5PBAps

These two have seen enough of each other to the point that there aren't many secrets between them, but the Swiss master did notice Nadal playing deeper along the baseline to return serve.

This opened angles for him, and while it took long volleys, Federer gradually positioned himself to become the aggressor.

He had Nadal covering serious ground, often in futile pursuit, which ultimately resulted in Federer's triumph:

Dude lost his focus in the second set but recovered in a hurry, doubled down on his approach, and after that, Bob was indeed his uncle.

At least Agut put himself in Wimbledon's record book by being part of that 45-stroke point in the third set. The fact it came after a 22-shot point cemented the impression that he was taxing the top-seeded Serb, but he was doing well to just keep things close.

By the time all was done and dusted, dude was really late for a prior engagement:

Roberto Bautista Agut was supposed to be in Ibiza for his bachelor party. Six of his friends are already there.

Instead, he's in London about to play Novak Djokovic in the Wimbledon semifinal.

Then again, anyone who's ever been to Ibiza knows one's never late for a party there because -- somewhere on that island -- one's in progress and never stops.

Maybe he sould invite Nadal. After all, it's close to home and he's amazingly free.