Published on 7-Jul-2013 by Stacey Mickles 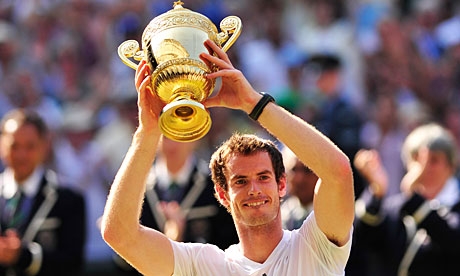 It took 77 years, a few broken hearts, and a close loss last year, but Great Britain finally has its Wimbledon champion.

After finally prevailing on his fourth -- yes, fourth -- match point, it almost appeared like Murray didn't know what to do next. He discarded his hat, dropped to his knees, put his hands to his head, and touched his forehead to the lawn that he had so valiantly trod for three hours and nine minutes, playing steady groundstrokes and ultimately getting to drop shots that proved to be Djokovic's undoing.

Falling behind early to  Djokovic early, 4-1 and 4-2 ,in the first two sets, Murray fought his way back into those matches and never looked back.

"That last game will be the toughest game I'll play in my career ever," said Murray, who -- as even casual sports fans have come to learn in the past fortnight -- is the first Brit to raise the Wimbledon trophy since Fred Perry in 1936.

Murray is still in awe that he won at the All England Tennis Club.

When he does come around to believing it, he might re-think his comment last year that the Olympic gold medal he won in London by defeating Djokovic would be his greatest memory, even if he would ever win Wimbledon. As great as the Olympics may be, Murray didn't see a national outpouring of pure exhiliration like he did on this day. Murraymania had crested to its ultimate nirvana.

By winning Wimbledon, Murray also did something that his tennis coach -- eight-time major champion Ivan Lendl -- didn't do. Lendl never won at Wimbledon.

But in a way, Lendl's drought ended Sunday as well.

Among the congratulatory messages was one from the Windsor household. Murray will hold it in high regard.

Some day in the future, Murray will meet the queen again. Most likely at Buckingham Palace, where he'll feel the ceremonial taps of a broadsword on each shoulder. It will be one of the most popular knighthood ever bequeathed. 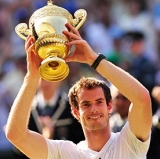 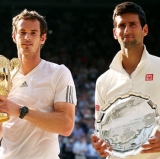