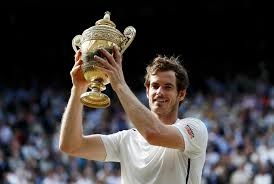 It's not exactly like a nation turned it's lonely eyes to him.

These have been disconcerting days for denizens of the United Kingdom, not the least of which:

So they were ready for a dose of good news from anywhere, and it came from Andy Murray in London's SW19:

The Scotsman's return of Milos Raonic's service was a telling factor in this one. At 6-5, the first Canadian ever to make a men's singles final at Wimbledon depends on intimidating power, and Raonic confirmed it by blasting a 147mph serve among his repertoire of howitzers.

He's done that or better before.

However, dude only notched eight aces. His average over the fortnight was 29.

Sorta like he did in the Queen's Cup, the traditional warm up for Wimbledon.

It didn't hurt, putting Murray in rhythm to avoid another historical moment: a loss would've made him the first to ever lose three straight Slam finals.

The way Britain's summer was going, that's all they would've needed.