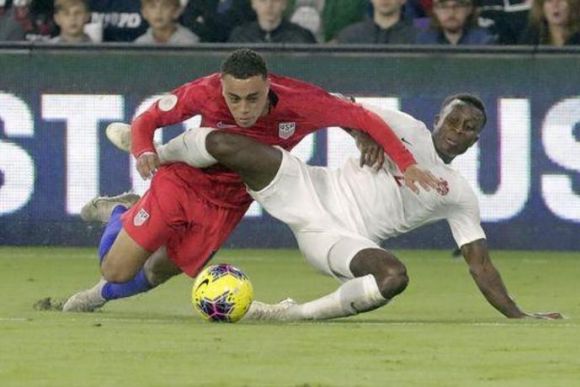 The latest installment of Concacaf's Nations League saw the earth return to spinning on its rightful axis. Gregg Berhalter

It's not that the United States Men's National Team and Mexico are entitled to dominate that competition or anything.

After all, they're the damn USMNT and Mexico in a folksy football neighborhood.

Not that El Tri has had any issues in being who they are and acting like it, but the Americans are another story. Again.

With all sortsa time to build up for the next World Cup, the program seems to be squandering it by reverting to old ideas that didn't work.

Reverting to a lunch-bucket manager in Gregg Berhalter to direct the side through a less-than-challenging international schedule that produced an embarrassing road loss in Canada, the Americans had something to prove in the return match.

Suffice to say they did in their 4-1 victory in Orlando:

The revelation here was 18-year-old dual citizen Sergiño Dest, who opted for the USMNT over the Netherlands. With his appearance in this match, he officially sealed the deal and looked good doing it.

Dude was one of seven newcomers in this rematch -- holdovers were defenders Aaron Long and Tim Ream, midfielder Weston McKennie and forward Jordan Morris -- and the injection of motivated talent shone through.

There was enough of it to keep the heat off Berhalter at the moment, anyway.

What's projected to be the Starting XI to make their run at the 2022 World Cup in Dubai has yet to made a full appearance.

It's doubtful this will happen for the USA's Nations League match in Cuba on Tue 19 Nov, which will round out the competition's pool play:

The Americans are already ahead of Canada on goal difference, so any sorta win will put them into the semi-finals with pool winners Mexico, Honduras, and Costa Rica after they toss their jocks on the pitch and gain at least a draw against hopeless Haiti.

Assuming they take care of business against the Cubans, the pool win will automatically qualify the USA for the 2021 Gold Cup semi-finals.

Which is where they should be by definition, anyway. They shouldn't have to make it so interesting.