Memo to USA Soccer: The Time for Smugness Is Long Gone 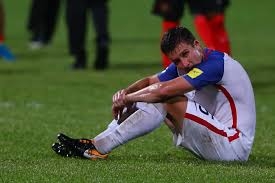 Here's a sobering perspective of the USA's failure to reach a World Cup in 32 years:

Christian Pulisic will be 24 before he gets another shot at helping America qualify for one.

The silver lining is he'll have ample time to hone his already-prodigal skills. In Europe.

Of course, it's not just Pusilic. The USA has other talented young players gaining valuable elite-level experience in Europe, as well.

It's not always smooth sailing -- Julian Green is a case in point of hype outpacing development -- and there will be attrition, but it needs to be done if the USA is ever gonna build any depth.

It's also beyond clear not enough will be done under USA Soccers current leadership at all levels.

No, dude, you make wholesale changes when the best you can do is make near misses against the worst team in the Hex your excuse for not beating them.

Bruce Arena did the right thing and fell on his sword, Now, you've gotta go, and you need to take your cronies with you.

The rot in American soccer's culture is the air of entitlement its leaders perceive, all the way down to the youth levels.

Their nose-in-the-air attitude -- totally inaccurate, incidentally -- that they put the game on the USA's map, they know something everyone else doesn't, and their insistence that English vernacular to add a hint of all-knowingness has become an oblivious self-mockery that can't be tolerated anymore.

In an uncomfortable number of youth organizations in the USA, leadership is more about building fiefdoms than developing players' skills. Elite team programs are often stacked with privileged suburban white kids, where travel demands and costs by definition deny those whose economic and/or social status aren't as accommodating.

That's only the first choke point that hinders the game in America, but it's a crucial one.

MLS has a right to expect support from USA Soccer, but not to the extent that it's the tail wagging the dog.

Demanding backroom influence over selections to the national team to include a contingent of their players -- Jordan Morris, what the hell are you doing in Seattle? -- who are, by definition, not seeing top-level experience on a weekly basis.

Frankly, too many veterans on the national team have been around too long. It's yet another example of USA Soccer's country club mentality.

That core of players had too much voice in the sacking of Jürgen Klinsmann. True, dude got a 'ways out there near the end of his tenure, but no one can say he didn't give new blood a much-needed shot -- which clearly disturbed the old guard -- and advocated the USA's best of the best young players indeed go to Europe, something the MLS saw as bad PR for its product.

Maybe it was, but the truth hurts. When they rise to the level of European leagues, call back.

Sunil's refusal to resign and intention to stand for another term as president of USA Soccer is as arrogant as selecting inside-man Bruce Arena to succeed Klinsmann.

Fortunately for him, USA Soccer is built on arrogance. Vapid arrogance, at that.

Nothing changes until that attitude does.

We just saw why.