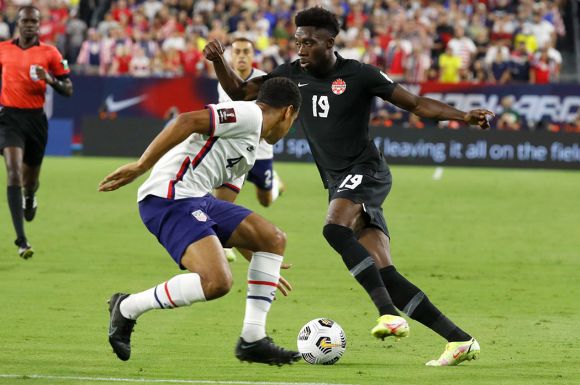 Word is the Great White North has produced its best national team since 1986.

That's when Canada actually made it to the World Cup down in Mexico.

To be clear, that's the only time Les Rouges have ascended to the globes biggest sporting stage.

The point to emphasize here is that the USA national team had better hope all this hype coming from north of the 49th has some substance to it. Because if it doesn't ...

Team USA missed the 2018 World Cup in Russia by a single bloody point because when all they had to do was jaunt on down to group cellar-dweller Trinidad & Tobago to take care of business, and they screwed it up.

That's as unthinkable as, for example, Dustin Johnson blowing a major title by missing a flat four-foot putt.

Bottom line, as usual, is you just can't mail it in.

What's disturbing about the USA's effort in its 1-1 Octagon draw in front of friendly fans in Nashville, it didn't look like dudes were mailing it in.

After their disjointed effort in that scoreless draw against El Salvador, it's tempting to recall that the first teams to put players' names on the back of their jerseys were in the upstart American Football League when they mounted their challenge to the NFL and eventually merged with them.

All of a sudden, fans could tell the players without a program.

Right now, this seems to put the USA fans one-up on their players.

Maybe Christian Pulisic was back from Covid-19 protocol, but Weston McKennie wasn't because he didn't even bother with protocol. Sergiño Dest reappeard from Barcelona, and it woulda been cool if someone woulda told him; the only time anyone noticed was a lone first-half rush that had no thought-out conclusion.

Gio Reyna and Zach Steffen were unavailable, too. Matt Turner was more than capable between the posts, but Reyna was sorely missed.

The best side Canada's ever had since '86 came out in a 5-4-1 formation, which says all anyone really needs to know about low bars.

Still, why wouldn't they? The Americans spent most of the match dicking around with the same sorta aimlessness that made the El Salvador match so frustrating.

If it weren't for Pulisic offering hint after hint of what could be done if only a teammate would pick up on one of them, there wasn't much else for him to do except bear the brunt of Canadian fouls, a strategy that woulda put a tear in their hockey-playing fellow citizens' eyes.

At long last, in the 57th minute, Brenden Aaronson answered a Pulisic call.

After hitting the post while being pretzeled in the 40th minute, the Chelsea midfielder kept an American possession going a quarter-hour later in the midst of another body blow. The ball ultimately found its way to Antonee Robinson on the left wing.

Dude had been one of the Stars & Stripes' bright spots for most of the evening and kept that theme going by sending a perfectly placed low cross into the crease where Aaronson had scampered to slide-tap it home.

But not for long. As in six whole minutes.

The goal clearly meant Canada had to emerge from their phalanx, and of all people, alleged speed merchant and occasional space cadet DeAndre Yedlin -- subbing in for Dest, who suffered a foot injury -- let Alphonso Davies beat him down the left wing.

Granted, dude's the most talented Canadian out there, but still. There was a crucial one-goal lead to protect.

However, once Davies served an incredibly wide open Cyle Larin in the box, there wasn't one any longer.

And that cost the Americans two crucial home points.

This is amazing on a number of counts. Among them:

These are not good traits for a side trying to erase painful memories.

With 12 more matches on the schedule and one more slated for midweek in this international window, here's how teams are faring right outta the gate:

The [a] connotations indicate Fair Play points determining tiebreakers in the standings since goal difference and goals for didn't settle matters. That tally stands at the Honduras with -3 and the USA with -5.

So those yellow and red cards are counting for something.

Full marks and a tip of the toque to the Canadians. Maybe they will match the feat of their 1986 team and make it to the World Cup.

The USA meanwhile, allegedly learned the value of a single point during the last World Cup qualifying. Simply put, it's worth more than the value they've given to earn it.

That goes for their management, too.