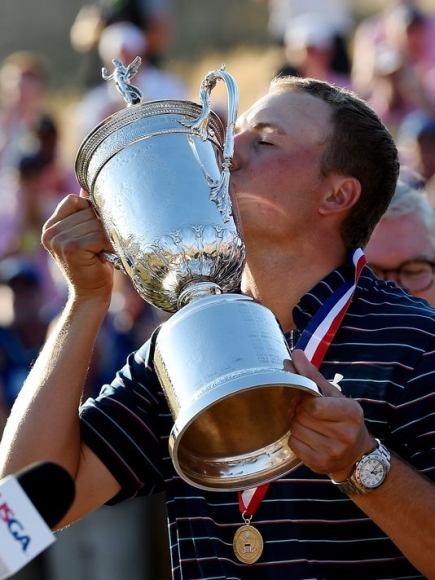 That Wayne Gretzky would've made it?

This sporting year has already seen the first Triple Crown winner in 37 years, confirmation of an NHL dynasty, and an NBA team claiming a title after a 40-season wait.

And yet, far and away, its most shocking moment happened on controversial ground in the Pacific Northwest:

Dustin Johnson is known for the long ball. Now, until another dramatic moment taps him on the shoulder, he'll be known for something else. It was probably judicious that Greg Norman -- Fox's analyst and memorable choker of the 1996 Masters -- kept his distance and ironically uttered, "I'm speechless."

In contrast, golf's legend-in-the-making Jordan Spieth survived a three-putt on 17, collected himself with positive vibes from his caddy, and did the routine thing on 18 after a brilliant approach shot banked off the berm behind the green:

Michael Greller was unusually prominent -- for a caddy -- in this event. Part of the reason, of course, was he lives in the region.

Aside from Jason Day's vertigo and before Johnson's collapse, the story was Chambers Bay itself.

Incidentally, Tahoma was the locals' name for the nearby volcano before the Europeans christened it as Mt Rainier.

Some of the other names being tossed around weren't as steeped in history. Gary Player joined the chirping, but frankly, his design lost out to that of Robert Trent Jones Jr. No cred.

About the only thing Player didn't do was compare Jones to Carl Spackler.

But here's the deal: It's hard to sympathize with bitching athletes who hop from country club to country club playing on manicured courses for purses that make winning nice but not vital.

As opposed to immaculate conditions on the field of play in team sports, terrain is part of golf's challenge.

The US Open and the PGA toughen up their courses every year. The fact the USGA selected a venue more true to golf's origins and forced pros to do some serious creative thinking out there was refreshing.

As to the greens, read the rough spots, dudes! You've had enough time out there to do your homework.

That obviosity was never more evident than at the final hole. In the end, both Spieth and Johnson found themselves in position to go to school on their lines when each of their playing partners had similar routes to the hole. Spieth was more observant, and he raised the Cup.

They all played the same course. The player who coped with it the best is the one who won.