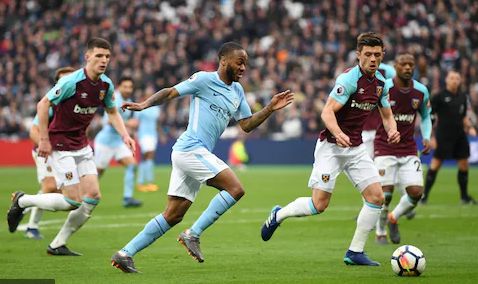 The Premiership's new entries this season had a hard opening week.

Dudes were drawn to debut against the league's reigning powers:

The Hammers didn't have one in hand this afternoon at the London Stadium. City absolutely thrashed them, 5-0, in a match where the VAR made a slight impact on disallowed goals and penalties.

City started threatening Łukasz Fabiański through Riyad Mahrez's fine finish. The visitors eventually got on the board in the 25th minute.

Kyle Walker displayed his fast pace down the right, and his perfect cross found Gabriel Jesus, who found nylon at the near post:

Impressively for the home side, that's all the Citizens got in the first 45.

But then the dam broke.

After the break, Raheem Sterling stepped up and found the promised land three times. The first one came in the 51st, as Kevin de Bruyne fed the English striker, and the rout was on:

Two minutes later, VAR proved to be crucial in denying City's third through Jesus after a pass from Sterling.

The English international was slightly offside.

City's elusive third thus came on 75 minutes when Sterling found himself face-to-face against Fabiański and looped over West Ham's 'keeper.

In the 83rd, Issa Diop fouled Mahrez inside the box compelling the referee to point to the spot. Substitute Sergio Agüero was the taker, but Fabiański denied him. However, VAR made its presenced known a second time, showing  Declan Rice's encroachment.

The Argentine didn't disappoint on his reprieve:

Sterling completed his hat trick in the 91st minute, being assisted by Mahrez:

Thus, the Sky Blues have jumped out to a decent lead in the goal-difference column.

Their next task is to see if that can stand up against Tottenham in an early-season clash of Premiership titans.