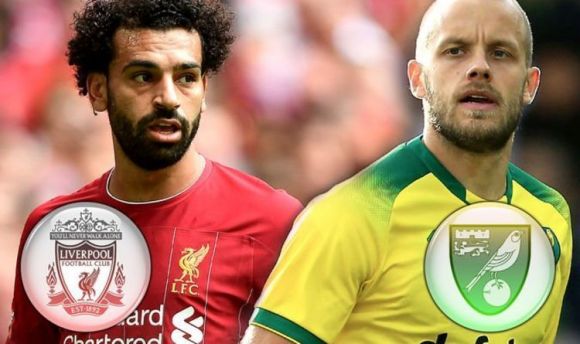 As if Jürgen Klopp's crew needs any help.

Still, Liverpool got it as newly promoted Norwich City put the first goal of the Premiership season into the Reds' net.

The current Champions League titlists began their domestic campaign with a 4-1 demolition of the Canaries, showing they didn't need no stinking own-goal to power power home a plethora of goals on their way into three points..

Ask the Canaries at your peril.

This was a clear statement from the 'Pool that, this time, they're going hard for Manchester City's throne.

The first goal was the result of Christmas in August, complements of Santa Grant Hanley. Dude attempted a clear and wound up scoring a beautiful 'no-look' anti-highlighter:

They've been playing professional association football in England since 1888, and this could very well be the first time a season's opening score was an own-goal.

Mohamed Salah got up and running with his fabulous skills as he became the first Red to be on the business end of an amazing team goal:

Dude's not a stranger to the football scoreboard.

Virgil van Dijk used his huge physique to muscle off a Norwich defender to easily knock a header home:

It officially became a blowout as yet another cross met yet another Liverpool noggin to notch another.

This time, it was Divock Origi finding nylon:

Whenever a side overtips the scales with an abundance of goals, a consolation goal always seems to be awaiting.

The same happened here, as well. Teemu Pukki rang up a lovely parting gift to give the traveling supporters something to remember on that long drive back to East Anglia:

If there was a negative on the night for the 'Pool, it was 'keeper Alisson Becker going down with a calf injury that forced him outta the match.

It happened on an unfortunate slip that could have some serious repercussions for the Reds' near-term future. What a way to go out:

The initial hopes were that he'd miss next week's matches, but this looks like one of those things that could cause issues for longer than that.

So it is that Liverpool's biggest challenge in the new season's early stages may not be the opposition as much as it will be Alisson's healing powers.