Ricardo Pepi and Fellow Subs Save the USA in Honduras 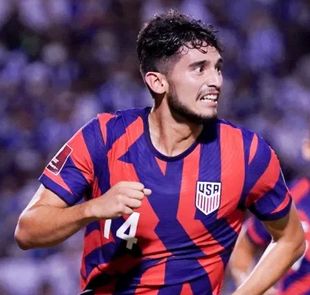 USA Men's coach Gregg Burhalter had been in this situation before.

No, not when he was leading the Columbus Crew in the MLS, where lunchbucket football could suffice at the time.

Harken back a bit further, when dude had a gig in Stockholm managing Hammarby IF.

Swedish club football is never gonna be mistaken for the Premiership or Bundesliga, but sides like the Bajen still have their expectations along with the resources to be perennial contenders domestically.

What their directors and supporters saw from Berhalter's bare-bones system week after week was a steady serving of excitement that could only be found in Swedish libraries. Worse, it wasn't getting them results.

If Berhalter didn't know before that vi ses -- pronounced vee say-us -- was the local lingo that loosely translates to later, dude, he did then.

In short, Berhalter was given the reins, he had the support, and he had the players.

It didn't work in a competition where there actually is a premium put on creative play.

So it's no wonder that someone no less than Christian Pulisic -- who's been there and is currently doing that -- was openly questioning what Berhalter was doing.

It's nothing new... I get you get talented players and they should "figure it out" while on the field... but this is the managers #1 in-game task. Adjust tactics to get your most dangerous players in the right spaces.. this has always been a problem for GB pic.twitter.com/vi3mDsLTf1

By all accounts, this USA roster should be the best they've ever put on a pitch. However, after 45 minutes in Tegucigalpa, even Burhalter had to see the writing on the wall.

The El Salvador and Canada matches were plagued by the USA's total lack of influence in the midfield and, putting it mildly, a tepid attack in the final third. Burhalter's response was to spring a 3-4-3 not only on Los Catrachos -- more local slang -- but on his own side, who clearly didn't have enough time to properly deploy it.

This was beyond evident on the Honduran goal. Brayan Moya was so open, he coulda had his own area code. Assuming a Romulan cloaking device can be ruled out, the only way that happens is the Americans' three-man back row was either poorly practiced on their new assignments or simply brain-dead.

Whether Burhalter experienced an epiphany of the obvious at halftime or simply saw his job security hanging in the balance, he made two immediate and necessary changes:

What the latter two were doing on the bench in the first place was something only Burhalter could justify.

As with the first two Octagon matches in this international portal, it'd been open season on Pulisic with the knock-on effect being his fellow forwards were stifled, as well. That included promising teen Ricardo Pepi.

For the second half, at least, with Burhalter's changes opening space and creating angles, calling the 18-year-old from El Paso promising is an understatement.

Pepi had a choice of declaring for the USA or Mexico, which looks even more like a tremendous coup for the Americans. In fact, his performance in this match may prove to be the turning point the USA had to have in order to make it to football's version of the promised land.

The changes allowed Pulisic to orchestrate the attack between Honduran assaults on his person, and the results were dynamic.

Every substitute figured into the Americans' three-goal explosion that left their hosts shellshocked. That'll happen when a side they held to zero shots on target in the first half comes outta the break looking like they've just remembered who they are.

Maybe they did. Their 1-4 comeback triumph made for compelling viewing:

Taking a longer look at the state of play ...

In this instant, the [a] indicates the tiebreaker of head-to-head away goals.

With the first Octagon portal in the books, it's possible that Burhalter realized a few things about his roster and what they were capable of doing, and perhaps he even remembered something about his past.

If so, USA supporters might have Hammarby IF to thank if the Americans keep it going all the way to Qatar.