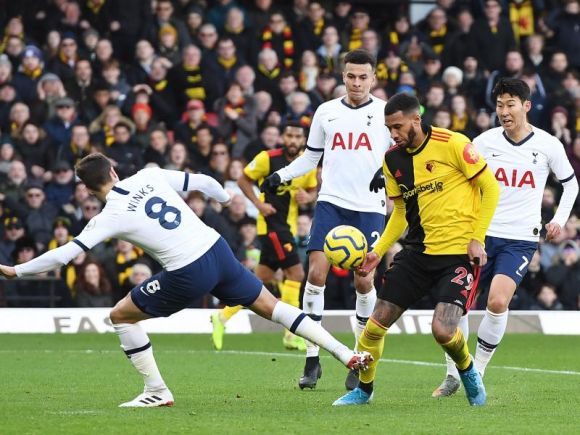 Getting obviosity outta the way ...

There's a big difference between Harry Winks and Harry Kane.

It's also not news that Tottenham Hotspur is sorely missing their only reliable scorer on the long-term shelf with a ruptured tendon. Until he's fit again, the best Spurs seem to manage are mercurial moments from Winks and the others.

However, when the best dudes can do against Watford is Winks' version of the hokey pokey, it's gonna be a long, hard winter waiting for Kane to return.

This is already a fact. So is Tottenham's 0-0 result at Vicarage Road, their third straight Premiership match without a goal.

It's coincidental that -- against the side once owned by Elton John -- the only game-flow offense came from pinball wizard deflections.

The Hornets had a golden chance to grab all three points when Paulo Gazzaniga guessed right and held firm to saved a Troy Deeney penalty.

Bummer for them, really, as they actually woulda been fair value for a fourth straight victory.

Gotta say, manager Nigel Pearson has his side playing according to his edgy personality, and for the moment, it's got them two points clear of the relegation zone.

As to José Mourinho, it's been tough sledding. Again, the Spurs' DNA aren't exactly aligned with his way of doing things, and the loss of Kane only makes the challenge more daunting.

Route One football is what elevated the Hornets to prominence back in the day, but it's clear Tottenham's players don't like it.

Until Kane returns, Spurs will look to Europe for a quality striker to take up the slack, which is substantial. After that, if results don't pick up, Mourinho would likely be on notice. Already.

Their hopes for a Top Four finish are already diminishing, as well as getting much further along in Champions League play.

Ironically, the Hornets' desires are much more existential. Dudes may have a better shot at realizing theirs.