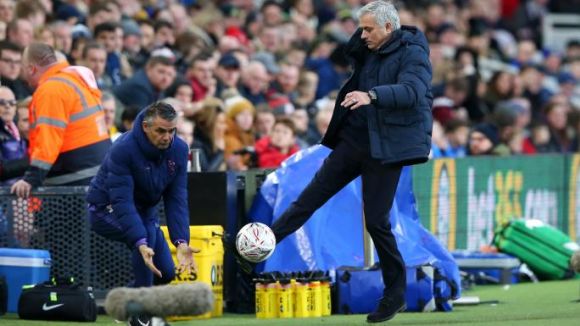 The offensively artistic -- and proud of it -- Tottenham Hotspur was always going to have awkward moments after signing defensive-minded José Mourinho to urge them back among the Premiership's elite.

Some say one of the best bets to make is on a team whose manager, coach, skipper, or whomever has just taken over for a fired predecessor because the sudden atmosphere change causes at least a momentary lift.

Not sure that's hard and fast, but it worked when the Special One took over Spurs.

Dude got a freebie when his reign opened with ...

Through it all, Tottenham's defense looked more competent but at the expense of pinache at the other end of the pitch. These were not smooth victories over so-so opponents.

Right, dude. How'd that work out for you?

It's not faring much better for Mourinho. When the competition stiffened, Spurs were torn between their identity and their instructions.

December losses at Old Trafford, Allianz Arena, and at home to Chelsea were part of a 3-3 run that took them into an embarrassing draw at Carrow Road against desperate Norwich City that needed a late Harry Kane penalty to salvage it.

That was followed by a loss at Southampton where the offense prevailed on the stat sheet only at St Mary's Stadium.

So the grumbling's begun in earnest, and it didn't get any quieter after Tottenham had to rebound yet again to level with Championship side Middlesbrough in a 1-1 FA Cup third-round fiasco where the injured Kane was sorely missed:

Another statfest where shots on target were even.

And with a full first-team squad, too. Kinda obvious when you realize The Boro came into this so depleted by injuries that midfielders Jonny Howson and Paddy McNair were pressed into duty among the back five.

Unless TV commitments dictate otherwise, the replay in North London will be on Tue 14 Jan, a day after the fourth-round draw.

All Spurs have before that to right the ship is a visit from Liverpool next weekend.

Odds are Mourinho's gonna be looking for that trusty ol' bus to park.

It won't help his side improve against The Boro, but dude needs a result, and fast.