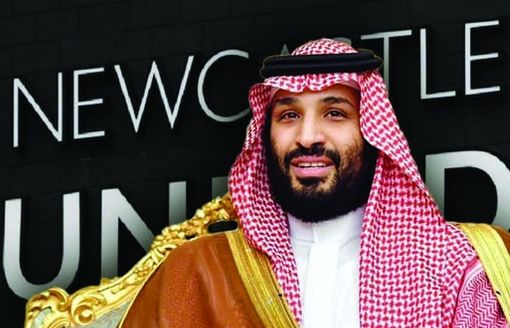 The other 19 Premiership teams claim they were blindsided.

But not as blindsided as Washington Post journalist Jamal Khashoggi was after he walked in the Saudi Arabian embassy in Istanbul.

Cold-blooded murder is almost always heinous, but it's the arrogance of Crown Prince Mohammed bin Salman -- aka MBS -- exploiting the trappings of his power that makes it even more appalling.

And he wants to remain in power no matter what a cabal of conservative clerics or a suspicious cadre of military leaders might ever think.

MBS is looking at a reign of over half a century if he plays his substantial array of cards right and keeps the populace relatively happy.

And being a sports fan is proven to increase your overall happiness.

This allegedly applies to Newcastle United fans, too.

For decades, the one thing where the Magpies have been consistent is incompetence.

In the meantime, Newcastle -- formed in 1881 and a charter member of the Premiership -- has wallowed while outfits from the Watford Hornets to the Leicester City Foxes have leapfrogged them to burnish their own histories of success.

It surely didn't take much research to discover that a rich shareholder helped their causes considerably. In the case of Leicester City, it came from a foreign shareholder.

On a grander scale, of course, all MBS & Lackeys had to do was gaze at the Manchester City and Paris-St Germain, not to mention the influx of American ownership groups, and decide that taking over the Magpies would made lotsa Geordies really, really happy.

More to their ultimate goal, if their petro-dosh awakens the sleeping giant that is United, international success is well within reach. If they can achieve this, they've got themselves a warm-&-fuzzy feelgood PR victory.

Could it be enough of a heart-warmer to erase the cold hard fact that MBS shakes down his own extended family and kills journalists?

Not to mention pisses off the other Premiership clubs?

It's a done deal, so any outrage is belated.

Technically, the new majority shareholder is Saudi Arabia's subtly named but infinitely wealthy Public Investment Fund. However, make no mistake; this is an MBS deal from start to finish.

Ecstatic Magpie supporters are so tired of their club's underachievements that they'd probably cheer if a consortium of Jack the Ripper, Dr No, and Kim Jong-un were the new ownership group. From their perspective, winning solves everything and full marks to anyone who can make it happen. Sportswashing is alive and well.

It surely won't take long for the new ownership to impose its will financially, and with Newcastle set to be a club on the rise, whoever MBS & Lackeys sign on to get the job done will be under immediate pressure to produce.

And now they'll have an owner who has ways of dealing with those of whom he disapproves.