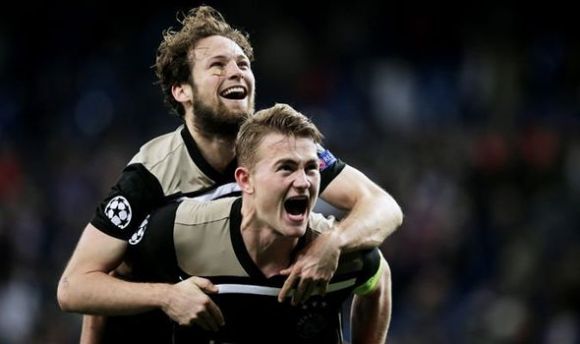 Dušan Tadić picked quite the occcasion to have the match of his life.

That's damn near how Ajax manager Eric ten Hag described the veteran Serb forward's performance as de Godenzonen -- Sons of the Gods -- lived up to their nickname.

Dudes staged with an absolute shocker of a 4-1 defeat over Real Madrid in the second leg of their Champions League Round of 16 death match.

Tadić set up the first two Ajax goals and scored the third, almost single-handedly justifying ten Hag's comment that his crew's effort on this night came pretty close to perfection.

Los Blancos' loss of Sergio Ramos due to abject stupidity in the first leg didn't help their cause, but mein Gott! With their resources, lack of depth is hardly an excuse.

But there it was, as his second -- the unfortunate Nacho Fernández -- so totally wet the bed that his 90th minute dismissal coulda happened much earlier and it woudn't have made a difference.

It's a cruel assessment, but a fair one.

And it pales in comparison to what the restless crowd continues to think of Gareth Bale, who wasn't in Real's Starting XI, and when he came on as a substitute in the 29th minute, he proved why. All of which further antagonized the Castilian crowd.

Ironically, Real took the first leg in Amsterdam, 1-2, the away goals of which woulda been daunting insurance in most other situations.

Not so in this one, as the Dutch side proceeded to prove:

For all practical purposes, Los Blancos' season as a contender is over.

Meanwhile, in the happier dressing room, Ajax was celebrating its first knockout match in 13 years by dreaming big.

Tadić is in the midst of a 25-goal season -- and counting -- a far cry better than he did at Southampton last year and a key reason why the Dutch side were able to pick him up for only £10million.

It's odds-on a few more of their players will be in demand, too, so these are rosy days in Amsterdam.

They're feeling the churn while Real's stuck with the burn.