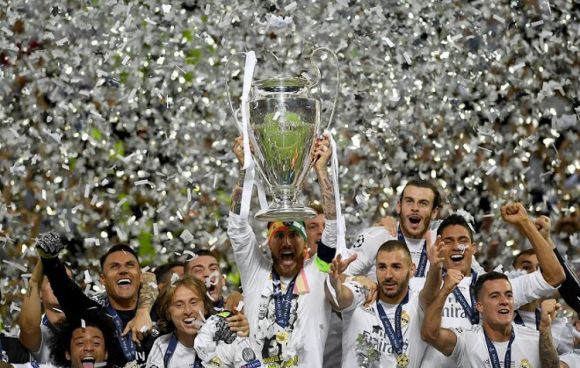 From a human standpoint, it'd be understandable to feel for Liverpool's German goalkeeper Loris Karius.

At this level, history will not be kind. It may mellow over time, but don't count on it happening anytime soon.

Just ask Bill Buckner, who insisted he stay on the field instead of being subbed for a better defender so he could celebrate a World Series championship for the Boston Red Sox in 1986:

The cruel irony is this: from the first whistle on a perfect evening in Kiev, two-time defending Cup champion Real Madrid were absolutely under pressure from an aggressive Liverpool.

Zinedine Zidane’s side couldn't play the way they wanted, mostly due to the 'Pool's front three, Sadio Mané, Roberto Firmino and Mohamed Salah.

Everything was going quite well for the Reds, until Sergio Ramos hooked Salah's arm with a wrestler's hold, tumbled to the turf ...

... and sent the Egyptian international straight to the hospital, where he was diagnosed with sprained shoulder ligaments.

Not cool with the World Cup three weeks away.

So, 30 minutes into the match and the Premiership's record-setting scorer was done.

After that, the game changed from water to wine for Real, although they still hadn't scored.

To that point and beyond, Karius was under absolutely no pressure. This included his gathering an innocent ball and having his choice of open teammates to serve, but dude decided to go with Karim Benzema’s foot instead.

Straight into the net. 1-0, Los Blancos.

Liverpool supporters -- who probably occupied something like two-thirds of the stadium -- were stunned, and rightfully so.

Nevertheless, the Reds picked up where they left off and quickly countered.

After James Milner delivered a corner, Dejean Lovren got a bitta touch with his head that ended up as an assist to the quick-reacting Mané. 1-1.

It turned out to be the move of the match.

And after a fantastic cross from Marcelo, Bale put paid to every woe this season brought unto him with an acrobatic, half-bicycle shot that put Real back in front:

What a spectacular goal from the Welshman who showed he could fly with neither wings nor Red Bull.

And if anyone thought the night couldn't get worse for Jürgen Klopp’s crew, it was time to think again.

Bale received a pass and from outside of the box, put a good boot into it, and well ...

Note there wasn't much spin on the shot, which made it a kinda knuckleball. But still:

What's on those gloves? Bacon fat?

Thus, merely by hanging around -- and with Bale rising from the dead -- Real Madrid becomes a three-time Cup champion.

Someone else, meanwhile, will become the sufferer of recurring nightmares.