Cristiano Who? Mason Greenwood's Strike Wins It for United 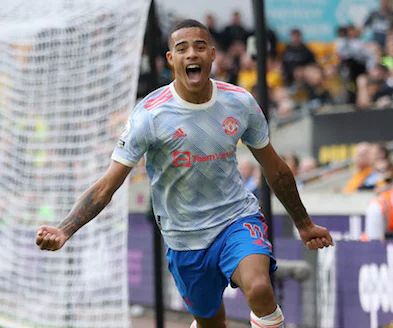 Cristiano Ronaldo, though, was nowhere to be seen. Dude will make his season's debut on 11 Sep at Newcastle.

Fortunately for United, Mason Greenwood was in attendance.

Dude can finish. His goal ten minutes before time sealed the deal on a 0-1 Devils victory.

OK, Greenwood's record-tying third goal in three games -- he's only the second teenager to do that in a Premiership match -- came after a spot of controversy that resulted in it, but he was nowhere near the scene of the alleged crime.

The sequence began when Paul Pogba laid the brakes on a Rúben Neves possession that Wolves believed was a touch too much:

Wolves may protest, but for now, whether Pogba did or didn't violate Neves is beside the point.

Yes, he's only 19 and the hard-pounding style of play that is the Premiership can take a toll. Chances are, though, this won't affect him much, and not because he won't get worn down.

It's odds-on he won't get the chance.

Two word, but only one of them is needed.

Someone's gotta get left outta the side, and more likely than not, it'll be Greenwood.

And so will other elements of United's game. The Devils should have enough defense to compensate for the Portuguese international's floating, which was becoming endemic at Juventus. Dude was never really all that enthusiastic about the turf behind him, but he wasn't signed to help keep opponents off the sheet.

Greenwood, on the other hand, was becoming a solid factor in the press and counter. He's clearly got the goods to spice up United's attack:

The Devils do have a reputation for bringing along their prospects, and Ole Gunna Solskjær will surely find opportunities where Greenwood can excel.

But dude could use a buncha playing time, and the irony is he's earned it.

It remains to be seen how much United will need him to get it this season.