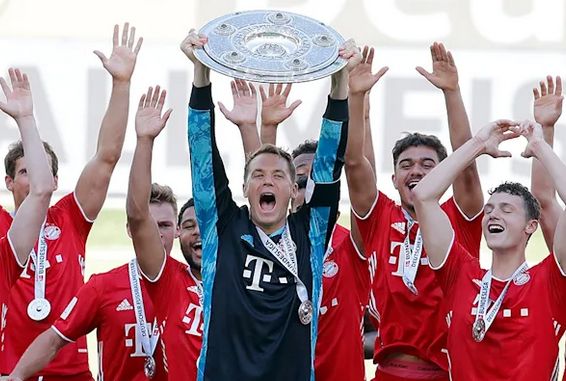 What an advantage for a nation to be led by a Chancellor with a science background in these chaotic times!

Maybe Sweden's customary trust in its government gave it all the headlines in the battle against Covid-19, but it's the Germans who produced the most efficient figures to combat it.

And it's the Bundesliga who put together a plan, became the first to restart, and is now the first to complete its season with very little interference from the pandemic.

And very little change at the top:

As to the rest: Even though Werder Bremen has been a mid-table fixture for most of the past decade, it's still a shock to see such a traditional side having to fight for its life to remain in the Bundesliga.

Die Grün-Weißen -- Green-Whites -- needed to defeat FC Köln in their regular-season finale today along with a Union Berlin victory over Fortuna Düsseldorf to escape an automatic drop. In fact, Werder's stadium DJ even played Union's anthem before their own match kickoff for good luck.

It's Werder and not FC Bayern who holds the record for most seasons played in the Bundesliga -- they've won the crown four times -- so they're not accustomed to such escape artistry as they're encountering this season.

For the record, VfB Stuttgart finished second and is automatically promoted. If Heidenheim prevails, it'll be the first time in their history they'll have ascended to the top tier.

Indeed. A heartfelt congratulations would well and truly be in order.

As it should be for German football in general. It may have been momentarily postponed by the pandemic, but it was not defeated.

To date, it's the only competition across the globe that's played a complete schedule under the circumstances. Hopefully, others will follow.