Real Madrid Thinks José Mourinho Can Save Them? Really? 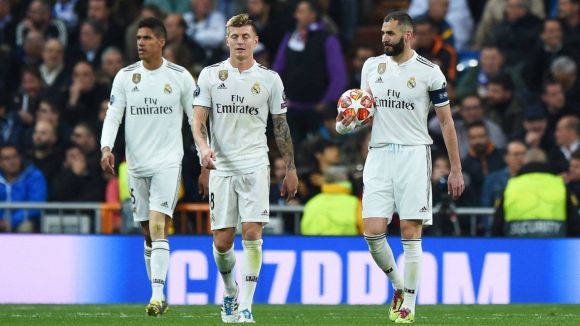 Putting it mildly, this hasn't been the sorta season fans of the Galácticos have come to demand.

And now, Real Madrid is on the verge of hiring a manager who not only couldn't get along with Manchester United's only Galáctico, the difference in how well Paul Pogba is playing under a less experienced manager speaks volumes.

José Mourinho's making out like a bandit because, apparently, his Special One schtick still has legs in Castile.

Real's soon-to-be ex-manager Santiago Solari has rarely made an effective move all season long. It hasn't helped that Gareth Bale is no Cristiano Ronaldo.

For those reasons and more, Real's totally incompetent showing against Ajax sealed his fate.

Let's revisit how the faux Galácticos entered their own imposing stadium with a 2-1 lead after the first leg in Amsterdam and managed to emerge with a 1-4 loss and an early exit from the most prestigious club competition in Europe.

Ajax began their boffo performance by scoring in the 7th minute, as Dušan Tadić robbed Sergio Reguilón, got into the box, and rolled it to Hakim Ziyech, whose aim was true into Thibaut Courtois' bottom corner.

The Dutch side doubled their lead in the 18th through Brazilian winger David Neres.

Tadić was the architect of the play and picked out Neres, who rounded Courtois and slotted home a looping finish:

At this point, Real had fallen into knockout status, and things only got worse whan both Lucas Vázquez and Vinicius Júnior had to leave the pitch in the first half due to injury.

After the break, Ajax got back with the same mentality and pace. It neutralized the hosts' daunting task, which was to score at least one goal and try not to concede any to force extra time.

They only had two chances, really: slim and none. And Slim left town.

This was underscored when Tadić showed up on Front Street again in the 62nd minute. That's when the Dutch side took advantage of an excellent counter-attack.

Donny van de Beek fed the Serbian international, who deked one Madrid defender and popped his shot into Courtois' top corner. There was a long VAR review to confirm the ball was kept in play by Ajax at the beginning of the play, and the electronic eye backed the officials.

Of course, not even a methodical destruction can go without a lovely parting gift.

Real got their consolation through Marco Asensio, who was dimed by Reguilón and took care of business from the box's edge:

Maybe the fans thought a bell would ring or something and say the next goal would be worth two, as they treated this score like it was a gift from St Nick.

After all, their homies only had to drill two more into Dutch twine to advance.

Lasse Schone ended that fantasy with an audacious free-kick from almost no angle.

The ball looped over Courtois, straight under the roof:

Real has now failed to reach the European Cup's quarter-finals for the first time in 16 years.

It's only fair. They didn't deserve to.