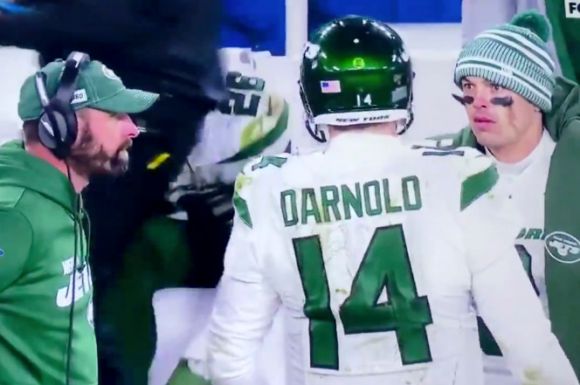 Any possible optimism that may have existed in regard to the New York Jets and the 2019 NFL season has long ago been extinguished.

While the wins have been scarce, the dysfunction has been predictably predictable.

This past week was chock full of embarrassing public displays, so let's review.

We'll lead off with the Le'Veon Bell late-night bowling escapades, which is without question a really big deal and worthy of discussion.

After being ruled out because of the flu for last Sunday's season defining win over the Miami Dolphins, Bell decided that going bowling the night and early morning before the game was certainly the right thing to do.

And just to make sure he was easy to spot, the former Steeler wore his orange leather pants.

Lavender wouldn't have improved matters much.

Of course, the optics on this are poor to very poor, but head coach Adam Gase dismissed the issue completely.

who did it better? 😂 in all seriousness, doctors sent me home all week & told me I couldn’t play on saturday. I lost 10 lbs! I was told to try and stay active, so I went with some family & bowled a 251... off the flu! 🤧🤒😷 they don’t call me a Pro Bowler for no reason 🤣 pic.twitter.com/yaCxXwb7id

This brings us to their Thursday night beatdown in Baltimore.

Despite the 42-21 final score, the Jets were almost respectable for at least part of the game.

However, things got ugly in the second half, culminating in this awkward exchange between the crazy-eyed Gase and his franchise QB:

Near the end of last night’s game, Sam Darnold and Adam Gase exchanged some words on the sideline. Not sure what was said, but backup QB David Fales’ reaction says a lot. pic.twitter.com/m0cdCBOcxF

Indeed, Fales has the look of a small child watching his parents argue.

Further investigation reveals the possible topic of this animated conversation:

Adam Gase says he was “bitching” to Sam Darnold about another player during sideline convo.

A closer look reveals who it was. Pay attention to who Daniel Brown blocked ... and who he did not: Free runner Jaylon Ferguson

Of course, this is all semantics anyway.

The Jets are forever doomed.