The Packers Must Be Re-Making Themselves in the 49ers' Image 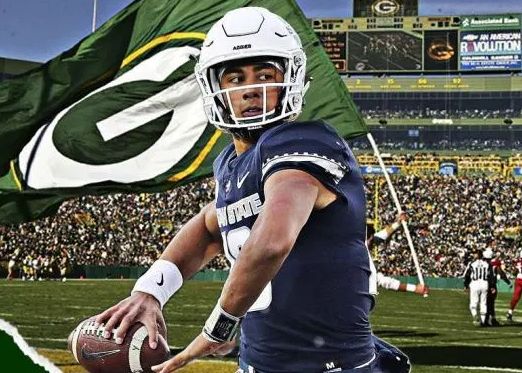 Is a philosophical shift underway in Green Bay, or was Jordan Love merely the best athlete available?

If it was the latter, why did they trade up four spots to make sure they got him?

Seems like there could be some serious deep thinking in process in and around 1265 Lombardi Avenue. Maybe even some palace intrigue.

Or possibly an intense reading of the tea leaves after a pair of beatdowns from the San Francisco 49ers.

The Pack was looking pretty ominous during the course of their 13-3 regular season. But then ...

Maybe their pride was singed after getting stomped by a coach whose choice in headgear makes him look like a Rob Dyrdek wannabe ...

Whatever it is, appearances indicate that changes are afoot in Green Bay.

Maybe they noticed that the top two teams in the league ran the ball more than they passed it:

Yes, Kansas City's was 375:576, but really, how many Patrick Mahomes clones are out there, anyway?

What does it say when their first two picks are:

After that, four of their next seven picks will be added to the mix to see who can both open holes and hold down the fort better than the o-line did against the Niners:

The 2020 Draft may have been loaded with WRs, and one draft class does not a team overhaul make, but it sure as hell looks like Green Bay didn't care either way.

They're looking to run the ball more, and maybe even in a perfect world, ask their chucker to go skyward only 10-15 times a game, kinda like the workload Jimmy Garoppolo handled in the NFC title game.

There's no reason to believe that Aaron Rodgers isn't gonna compile another sterling season, but the cost of his doing so has clearly become a consideration. In the event the Pack would trade him now -- and it'd only happen if he demanded an immediate trade -- it'd be a a $45.9million cap hit.

Rodgers, of course, has been there and done that. Brett Favre made the experience totally awkward.

Dude's already called Love and welcomed him to the team. He knows his current backups -- Tim Boyle; as to practice squadder Manny Wilkins: See ya -- have thrown as many NFL passes as Love has. If the Pack's gonna contend again this season, it's only logical that a team needs insurance in case a 36-year-old QB goes down.

For all intents and purposes, Rodgers may be on the clock as a Packer, but if they're actually re-tooling to become more of a running team, that's probably what he'd want anyway.

Happy endings all around are still possible.