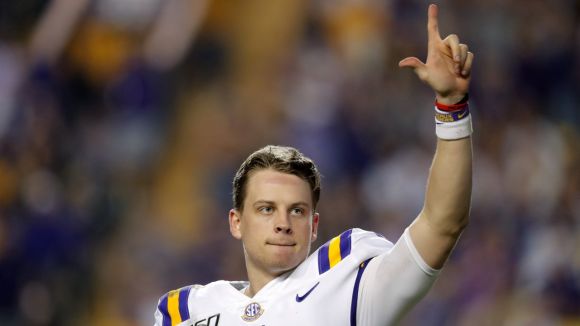 There's finally a silver lining to that scourge known as Covid-19.

It saved the NFL from itself on Draft Day.

Everybody's wisened enough in modern times to know that all major sports operations are corporate, but none of them flaunt it like the NFL.

The show they were planning in Las Vegas was gonna be full-on Rat Pack era.

While The Shield did have plans for sideshows where their heart-&-soul fans could partake, its version of splendor was gonna redline the garish-o-meter as most old-boy corporate events are wont to do.

The stage for the 2020 NFL Draft in Las Vegas will be on the water at the Fountains of Bellagio. The players will be transported to the stage by boat. pic.twitter.com/8sVl8p2ZBx

This may be the dumbest thing I have ever heard. 🤨 pic.twitter.com/imOcmPgm6A

The only thing missing was a shark to jump.

Fortunately, the lockdown spared everyone and, instead, the NFL stumbled onto a presentation that far and away more watchable, containing lotsa entertaining nuggets to enjoy.

They started early, too, with the Commish acknowledging a Draft Day tradition from his bunker basement headquarters for the night:

Zoom fatigue may have become a thing during the quarantine, but full marks to the NFL for deploying it in a kajillion places to make this an actual extravaganza for the masses.

It was totally cool to see how the general managers and coaches set up for the draft without the benefit of a war room, and really, from now on, who needs a war room?

Especially since the geeks were on their game and stuff like this was avoided:

When a hiccup did happen, it just sorta melded into the format's fabric: How apropos was it that the classic placeholder text appear with a dude named Noah Igbinoghene?

Still, the crew got it right everywhere else, and with the first pick of the night, so did the Cincinnati Bengals by going no-brainer on Ohio native Joe Burrow:

And so it went.

There were a few surprises on the virtual center stage, depending on who is being asked.

The best ones, however, came from the various video feeds.

Tennessee Titans coach Mike Vrabel, for instance, looks like he's got the human resources to keep his lockdown from being boring:

Mike Vrabel’s house is like a scene out of Breaking Bad pic.twitter.com/knruKwRSDZ

Every party needs a dude posing as Frozone, and why not have one of your kids wear your 2007 All-Pro jersey, since that's the only one you earned? That's pride, right there.

For the record, his kid in the other room is not dropping a dookie, according to Vrabel. He's merely sitting on a stool playing a video game because drafts have lulls.

When he's not drafting linemen, it looks like New York Giants GM David Gettleman hangs out in the attic when he does the cyber thing.

Dave Gettleman on the mask: “I’ve got a young IT fellow in here with me and we’re social distancing, and part of it’s the mask. I’m fine”

Gettleman is in remission from lymphoma, so naturally the Giants GM is extra cautious amidst the COVID-19 pandemic

Then there's new Washington coach Ron Rivera, who either likes to live sparse or the furniture's not arrived from Charlotte yet:

And because football drafts are meant to be done outdoors, Tampa Bay coach Bruce Arians is showing the sorta cool out on his patio that makes a six-time Super Bowl-winning slinger want to play for him and bring a friend, too:

We also now know who's behind Bill Belichick's personnel decisions:

Look at Bill Belichick trading up and picking Josh Uche.pic.twitter.com/WzID8HMGSp

Then there's the OG who's gonna have a special kinda beard if he gets another facelift.

Jerry Jones just doesn't get it if he thinks now's the time to publicly quarantine on his super-yacht while so many fellow citizens are going through the most trying times of their lives.

And here's the 21st Century version of Ursula, peel me a grape ...

Jerry Jones doesn't even hold his own phone pic.twitter.com/sZdbuwR4VF

No, if you're gonna win the Internet, show what $4.5million will get you in the Arizona suburbs:

If that doesn't score mega-points with his girlfriend, maybe he can mosey over to his neighbor Alice Cooper and ask if he can get her in his next video.

It'll give her something to do while he's trying to figure out who in this draft is gonna help the Cardinals get to .500 whenever the next season rolls around.

Meanwhile, the 2021 Draft oughta be held at his house. It's the only thing that could possibly match this year's.