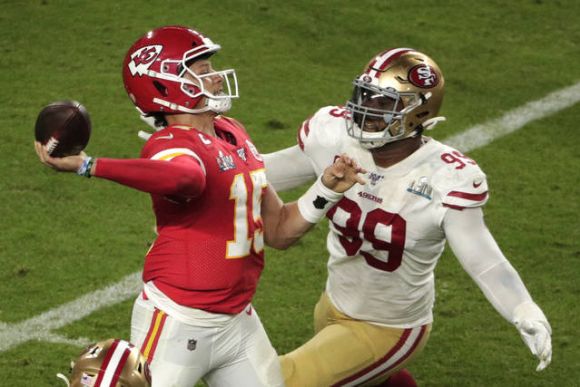 The only other time Kansas City won the season's final game -- Super Bowl IV, which was also the AFL's last game ever -- Patrick Mahomes wasn't even born yet.

He'd show up later that year, August 1970, grew up to put together a solid MLB career, and sired a kid who turned out to be a pretty damn fine baseball prospect himself.

Turns out he dabbled in football during the offseason. Did pretty well, too, enough to become a two-sport jock at Texas Tech, where his baseball bio is stuffed with his football accomplishments as a prolific slinger.

The Chiefs jumped at the chance to trade up for him after he declared for the 2015 draft after his junior season, dealing Buffalo their first- and third-round picks that year plus a first-rounder in 2018 in expectation of good things happening sooner rather than later.

... who ultimately led Kansas City to the 2019 playoffs where they mastered the art of spotting opponents leads and then coming outta the hills like Attila the Hun.

Who knew that crew would need to do it again in Super Bowl LIV and leave it until the game's final seven minutes, no less.

Then again, the San Francisco 49ers were just the sorta team to force the Chiefs into a reality check.

During their time on the field in the game's first 52:43, Nick Bosa and Arik Armstead were by far the best players out there, antidotes to whatever magic Mahomes was trying to conjure. They led a defense that was making him look ordinary for one of the few times in his NFL career.

That play in itself was damn near a game-changer. It came with 6:27 left in the third quarter with the Niners up, 13-10.

Had they recovered, they'd have a short field and probably do some clock-chomping with their devastating running game.

As in, what running game? The one that was instrumental in getting San Francisco this far?

The longest rush by a WR in #SuperBowl historypic.twitter.com/hJNSA8NZuf

There weren't enough of those, as Kansas City decided if the Niners were gonna beat them, it'd have to be through the air.

Jimmy Garoppolo was definitely rested enough after attempting only eight passes against Green Bay. Dude went 20-31 but for only 219 yards; it seemed like ball-control stuff, even though six of them went for 12 yards or more. The net result was San Francisco's passing game never did open up much on the ground.

It made a blue-collar star outta Harvard grad Kyle Juszczyk, though, bringing glory back to the thankless fullback position:

FULLBACK TOUCHDOWN IN THE SUPER BOWL.@JuiceCheck44 stays on his feet for the TD reception! #GoNiners

Maybe their offensive day wasn't perfect to that point, but their defense was close to it.

It's what they stepped in with 7:13 remaining that'll haunt them.

It's a three-receiver misdirection that worked against New England in last year's playoffs.

The real challenge was Kansas City's o-line giving Mahomes the time he needed for Hill's route to develop. Up to that point, it was a dicey proposition, but here, when the rubber met the road, dudes came through.

They're the unsung heroes yet again.

The drive produced a 1-yard TD pass to Kelce, and the Chiefs were back in it.

The Niner offense wasn't. After the TD that put them up by 17, it fizzled with lotsa help from the KC D:

Clearly, those consecutive snuffed drives meant San Francisco's defense wasn't getting the rest it had been for most of the game. The toll was finally being taken.

Bottom line: the Mahomes magic showed up late, but when it did, fireworks followed and coach Andy Reid finally has his ring.

For the third straight playoff game, the Chiefs came back from a double-digit deficit and -- as predicted over in the Daily Stake section -- win Super Bowl LIV, 31-20, cover the spread, and nail the moneyline.

Fifty years ago, in Super Bowl IV, Kansas City's Hall of Fame coach Hank Stram chortled on the sidelines after the play he sent in -- the 65 Toss Power Trap -- produced the TD that sparked the Chiefs' victory.

Now, the team's added another one to the legend, suggested and then started by a dude's whose own legend is only gonna grow.