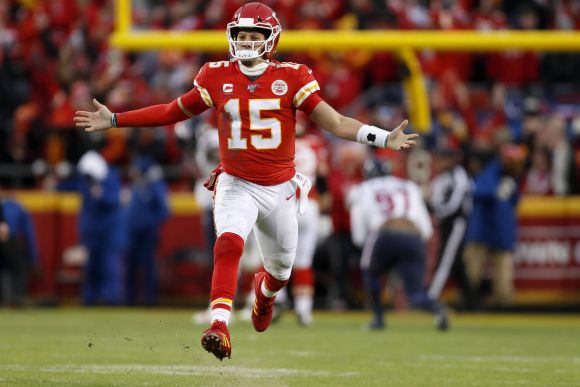 Dude's opus, Poetics, is considered by many to be the birth of what's known to writers ever since as the three-act play.

Simply put, here's how that'd look from the Texans' point of view:

Conversely, just switch Acts 1 and 3 for the Chiefs' version of the game that sends them to the AFC Championship tilt for the second season in a row.

To say they did everything wrong in the first quarter is to bring a Geico commercial to life:

So how did Houston jump out to a 21-0 first-frame lead so quickly? Let us count the ways:

The bulk of Arrowhead Stadium was in shock.

Believe it or not, the turning point -- and the start of Act 2 -- was so incredibly self-inflicted, it was enough to think the Oilers' ghost and the 1992 season's Wild Card collapse still haunted the city of Houston.

Before the game, Texans coach Bill O'Brien said he didn't really want to punt to the dangerous Hill, but for chrissakes, he was already points to the good due to Hill's muffed catch that led to the scoop-&-score.

So this decision was bloody ridiculous:

Act 1 was the set-up. Act 2 was all about the challenge, and the Chiefs accepted it with ferocity.

The first four the result of Pat Mahomes II passes in the second quarter that turned a 24-0 deficit -- considering the circumstances -- into an unbelievable 28-24 halftime lead:

The @Chiefs are on the board!@PatrickMahomes to Damien Williams for the 17-yard TD. #ChiefsKingdom #NFLPlayoffs

WE'RE NOT OUT OF THIS 🏹 pic.twitter.com/1nPm0ZyuyR

This is when confirmation came that karma had well and truly switched sides:

I have aged many moons in the last 10 minutes. pic.twitter.com/DvK2BI3lL3

Then, for the coup de grace:

THE LEAD IS OURS! pic.twitter.com/wP8twefm8B

Lotsa records to keep the trivia geeks happy, but this is the big one:

Houston/Kansas City is the first game in NFL history, regular or postseason, where a team led by more than 21 points after the first quarter and trailed at halftime.

It's set up a classic run-vs-pass matchup when the Titans come to town to decide who's going to Super Bowl LIV without having to buy a ticket.