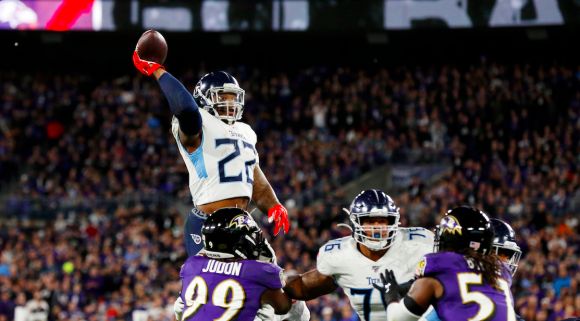 As if we didn't already know the secret to Tennessee slinger Ryan Tannehill's resurrection ...

Give the ball to Derrick Henry and get the hell outta the way.

That includes, apparently, watching in awe as dude jump-passed for a TD that vaulted his QBR and RTG to tops for the day, besting his teammate as well as a busy-but-frustrated Lamar Jackson as the Titans deposed the AFC's top-seeded Baltimore Ravens, 28-12.

What can't he do?! #Titans #NFLPlayoffs @KingHenry_2

Loved the style points. It sure beat the hell outta flipping the ball over to a wide-open and frantically waving Marcus Mariota.

Anyway, for the record:

Contrast those to the pair who are paid to be QBs:

That's where the Ravens were supposed to be living.

Their total analytics buy-in did serve them well in the regular season. However ...

... which is probably what Jackson's 20-143 ground game feels like right now.

For as spiffy as his numbers looked, Tennessee stopped him on two 4th-&-1 situations, the first of which happened early in the second quarter and quickly led to this QBR-RTG booster for Tanneyhill:

Adding to Baltimore's woes, Jackson's receivers flat-out dropped three of his passes. On top of that, his first interception went right through his target's hands.

That set up a short field for the Titans in the first quarter, who made short work of it, compliments of Jonnu Smith:

However, the two lost fumbles were squarely on Jackson. Especially his second, which set up the Titans on the Raven 20 and led to Tanneyhill punching it in from the 1.

Putting it mildly, Baltimore's inability to keep the ball was a major buzzkill, opening the door to Henry's punishing runs dominating the game.

Dude's pretty good at that, too.

Take that to the sportsbook.