Raiders Stadium's for Vaxxers Only; They'll Even Offer the Shots 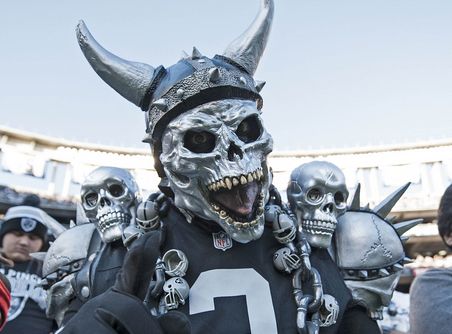 This time around, instead of telling Oakland fans to just stick it, the Las Vegas Raiders owner is offering unvaxxed fans who wanna see a home game that he's ready to stick them again, but in a socially responsible way.

Full marks for what he's trying to promote on behalf of humankind.

As opposed to some NFL clubs who are maddenly slow on the uptake that the Covid-19 pandemic is still alive and dangerous, the Raiders are taking a proactive approach that goes beyond their organization.

On game days, fans who enter Allegiant Stadium must either ...

If a season ticket holder doesn't want to comply, the Raiders will offer the options of a refund or a carry-over of the purchase to apply against the following season's ticket package ... assuming the pandemic's finally abated by then.

Of course, the Covid-19 vaccines don't totally kick in to protection mode until two weeks have passed. So, for anyone who gets the shot at the stadium gates, Raiders staff will also provide a mask.

With this crowd, that's gotta be specified.

Those who can't be vaxxed -- like kids under 12  and fans with certain medical conditions -- will obviously be required to mask up.

The Delta variant has proven to be particularly insidious, and it's been a total bitch that a significant section of the populace, for whatever reason, is so resistant to accepting this as fact.

It's more transmissable, so being in any sorta large crowd without taking precautions is inviting the odds of being infected swinging strongly in the virus's way.

The very nature of sports involves a heavy dose of teamwork, and that's what it takes to fight a pandemic. By definition, it's an attack on society and is only kept in check when it suffers from a lack of hosts.

Unless someone's entirely off the grid, then, talk of individual freedoms being impinged upon by mass social action is playing right into the disease's wheelhouse. As to resisting the vax for political reason ...

So, Mark Davis and the Raiders, of all teams, is setting an example that hopefully spreads faster than the Delta variant. As the USA's most popular professional sport, the NFL can afford to throw its influence around and join other major corporate enterprises in mandating vaccination.

The Raiders are just taking it a welcome step further, demanding their fans to get with the program.

It's the most effective way to come outta this a winner.

The Raiders may not always cover the spread, but for those of their fans getting vaxxed at the gate, they've done their bit to make certain more of the populace covers their face.

As to everyone else in attendance, they're getting recognized for doing their bit to dial down the delta. May this policy spread to stadiums and arenas everywhere.