Published on 3-Aug-2021 by Alan Adamsson 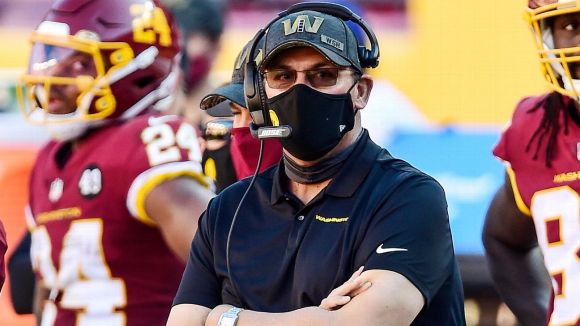 If anyone can relate to the miracle of modern medicine, it's Ron Rivera.

Dude's coaching the Washington Gridiron Football Team -- not that anyone's gonna confuse it with the DC United football team, but still -- because among other things:

Safe to say he's got more than a modicum of cred on both topics.

So any salient adult would think when he says something that's coming from his wheelhouse of experience -- like, say, medical science knows what it's doing -- other salient adults who work with and/or know him would heed his words.

One would thus think that living proof before their very eyes would be enough to make the case for persuasion.

For whatever reason, most of which were nonsensical by definition, an overwhelming majority of his players did not take heed. Not even when he went public with his exasperation.

If anyone would take note of appeals to good health practices, it oughta be football players.

Instead, they didn't really pay attention until word came down on stone tablets from that burning bush that is The Shield:

If teams can't play a game due to Covid-19, they'll not be seeing a paycheck for that week.

So now the concept of vaxxing for the greater good is taking hold.

Not with all players, of course, but sooner or later, they'll either figure it out or risk themselves -- or those exposed to them if they're Covid-positive -- playing for a grimmer coach.

Yes, that's an extreme, but the fact remains, as long as Covid-19 hangs around, the worse it can get.

Already, it's evolved into the Delta strain that's claiming more victims than the original version. and now the virus is morphing into something even more dangerous:

Mutations are gonna keep happening until the virus has nowhere else to go. That's the point of herd immunity, to virtually eliminate hosts for it.

Vaccines play a vital role in making this possible, just as they did with polio, measles, mumps, smallpox, and so on. That's why most public school districts demand students have their MMR shots before being admitted.

Since the NFL edict and Rivera's emphasis on taking one for the team -- if nothing else -- WFT's players have begun to see the light. Team vaxxing is now up to 84%, getting them close to the league average in this regard.

Read the tea leaves, dudes! Or at least the memes ... No one knows if the chipmunks around Lake Tahoe that are riddled with the Bubonic plague would take precautions if they were higher up on the cognizance ladder, but allegedly, 99.9% of humans are.

Thus, it's no wonder those who respect reality are becoming more and more exasperated with the others who for one wacko conspiracy- or politically-related issue or another, continue to defy logic. Even if data is increasingly showing kids are more vulnerable to Delta and Delta Plus than the earlier Covid-19 strains.

And a good number of them look up to athletes like football players.

With Washington's players slowing coming to grips with the issue, the clock is now on the Minnesota Vikings.

They're now in last place in the vaxxing race.

The club's already cashiered an assistant coach for his warped interpretation of 'individual freedom'. Maybe he's still rebelling against mandatory seat belt laws and unpasteurized milk in grocery stores, too. And yet, Viking players are slow to come around.

Maybe someone should tell them that all Vikings die, but only the heroes get into Valhalla.