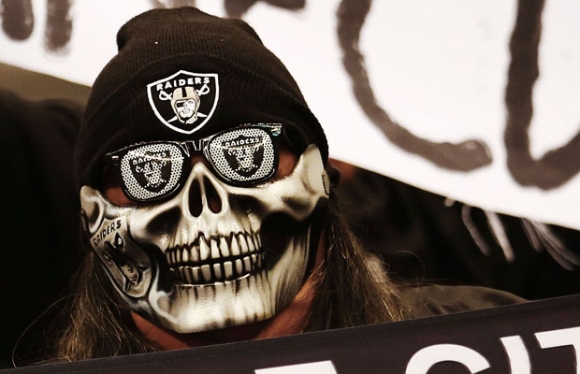 The Roman Empire did have a few moral drawbacks -- sticky issues like slavery and persecution -- but those dudes sure knew how to build a stadium.

The Colosseum was in use for 400 years or so.

That's definitely not happening anymore, even though Pennsylvania's Franklin Field is giving it the old college try.

Then again, the Quakers are hardly gonna squeeze Philadelphia's citizenry by threatening to move if they don't get more dosh for a new playpen.

Pro sports franchise kajillionaires usually hide behind the fact that technology turns over so quickly that it's cheaper to build a new facility than retro an old one, even though the City of Seattle is thinking about challenging that notion.

Still, at least recent times saw these ultra-rich pay for their own buildings.

But the Raiders are nothing if not agents of bucking trends. And they've done it again.

The kid learned more from his pop than he's ever been given credit.

This is the Raiders. Their only home, really, has been on the streets, what with their silver-&-black drawing fans that NFL suits would rather see go far, far away.

Ironically, their rebel image will likely survive this sell-out to big bucks and glitz, as Davis the Younger joins his fellow owners about only caring about fans behind glass and in front of screens.

And to think the Las Vegas move would've come to a screeching halt if Bank of America didn't remind fans that corporations are people, too.

And what of Oakland?

The city's stuck with an undeniably delapidated stadium that even the Athletics are trying to leave. There's no dosh in the coffers when real civic services such as education, infranstructure, and public safety have unfulfilled needs.

But Davis -- the dude in profit, as opposed to the city -- never gave a serious thought to helping retrofit the club's spiritual home.

The only way they get that in Las Vegas is if they shoot another Hangover sequel.

So, unless something drastic happens in the next two seasons the Raiders will be lame-duck tenants, Oakland has joined a select group of cities that have been abandoned twice in modern times:

Can't count Kansas City, as the Athletics and Scouts were in different sports.

And don't cram Los Angeles into that mix, either. They're the light to sports owners' flies. The black light.

All that glitters, dudes.